Oh, sure -- it easy to create drama when you've got the Big Three at odds with one another, secondary heroes and tertiary villains dropping like flies, and invaders from the multiverse lowering.

But Golden Age Starman? He could create drama with a bald guy preparing to talk into a short-wave radio: 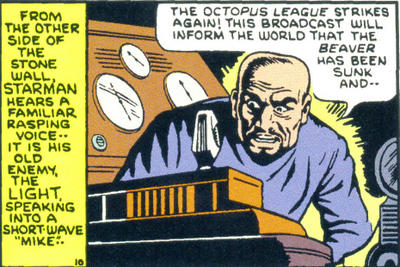 Surely you remember .... THE LIGHT!
Among his innumerable evil deeds, the Light actually discovered sweet sweet octopus love, popularized it among the wicked and weak, then founded an entire League of evil-doing cephalopodophiles.

From what I can gather, he and his legion of 'podophiles must have some plan to weaken worldwide morals and emasculate the fighting forces of the civilized nations through the spread of octopus love to the exclusion of reproductive intercourse. I suspect "the Beaver has been sunk" is some sort of code. 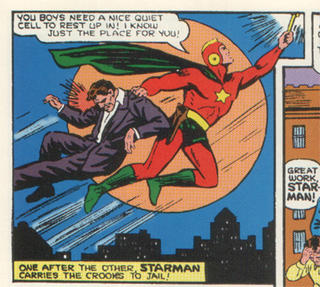 While the raspy voiced Light (only evil people -- and aerobics instructors -- have raspy voices), as always lit heavily from below (hence his name), huddles closely over his insensitive "mike", Starman is just on the other side of the stone wall.

Even Starman's hearing is superior! Despite the earmuffs built into his headgear, he can hear the Light's minatory rasping through a stone wall.

Starman was the best.
Posted by Scipio at 6:20 AM

It can't work as a matter of fact, that is what I consider.
pregnancy announcement wording | life alert system | bladder stones in dogs