If we're going to try to find some fun in The Horror That Was COIE (Crisis on Infinite Earths), I guess the first sensible place to start is with appearances by our special favorites. Yes, yes! That's something everyone liked about COIE; everyone (other the Inferior Five) appeared in it, so whoever you love has almost got to be there, even if only in one panel. Unless, it's, you know, like, the Bug-Eyed Bandit.

Who's our favorite? STARMAN!

Surely, with the melodrama gushing from every benday dot on every page, Starman would be a natural for COIE. Let's take a look! 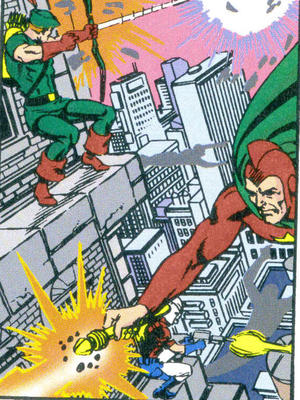 He's flying! And firing! And... hm. That's it, huh? No haiku? No lines at all? Not even lit from below? Okay, that's a bust, then. Well, I can't blame Wolfman, I guess. I mean, it's not as if the villain's plot hinged upon the use of some giant machine that collected stellar energy like his cosmic rod. 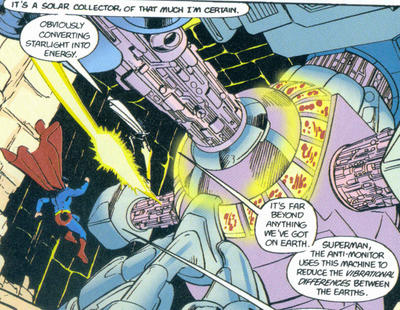 What next? Oh, I know: stripped down rock hard personification of justice UNCLE SAM! We love Uncle Sam! Let's see what that halfnaked slab of patriot power can REALLY do! 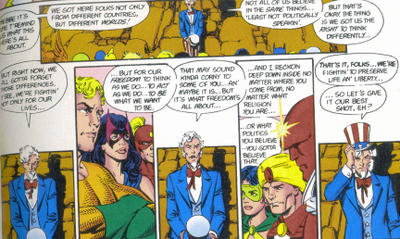 AQUAMAN: "Eyes--rolling up into head--must--remain conscious!"
HUNTRESS: "On Earth-2, this would be over by now. On Earth-2, the bad guy would have already fallen into a vat of acid. On Earth-2, I could shoot an arrow through the old guy's forehead."
JUDOMASTER: "That's it, I'm joing the Axis. And stop cutting my face in half!!!!"
PHANTOM LADY: "I want him so bad, I just can't stand it any more. Please Sam, show us the white hot sword of victory..."
SARGON: "With each passing paragraph, I, Sargon the Sorceror, am feeling increasing EVIL."
JEMM, SON OF SATURN: "ZZZZZzzzzzzzzzzzzzzzzzzzzzzzzzz."

Oops. Well, I sure that the viewing audience and the readership is inspired to--

Well, perhaps we'll get a few words from Sam later, after his, er, nap.

PLEASE tell me we can salvage at least ONE DECENT moment with one of the Absorbascon favorites. A mind-controlled Black Condor does get to sock the Golden Age Hawkman with the silly yellow hood on, but it's not really a fabulous moment. We need a fabulous moment, we need-- 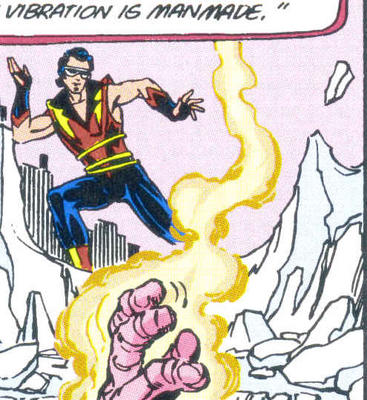 Vibe doing "the Robot" to celebrate his victory over Plasmus.

Phew! I feel SO much better now! You're dang right vibration is madmade, baby!

See? You can always rely on Vibe, people; he's the man.


P.S. The Bug-Eyed Bandit DID get a panel-- and dialog (unlike Vibe and Starman).
Posted by Scipio at 12:39 PM

Are you really surprised? Uncle Sam is a politician at heart.

Did Superman crap his pants in fear of the solar collector?

BEB did have a line. He asked Clayface to help him fight the Shadow Demons. They were both killed and rarely remembered.