I shall make you a fisher of men. 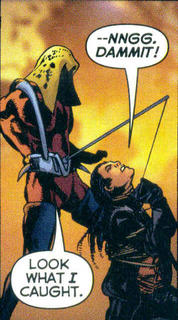 "Nggg Dammit?" Hm, sounds like a Vietnamese name to me...

No, my dear, that's "the Fisherman" an "old foe" of Aquaman. 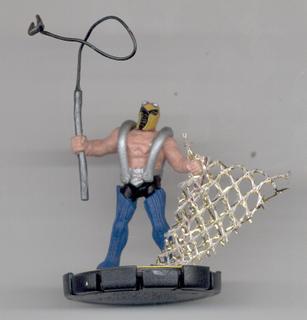 Filmation Cartoon.
He was in the famously bizarre and bizarrely famous Aquaman student film (although they called him "The Angler", which is actually a cleverer name).

Does he complain? No; complaining is for comic book bloggers, not fishermen.

My father, may he rest in peace, was a professional fishing guide in the wilds of Quebec (which is why I know how to kill a deer with a paper clip and rubber band from 50 yards, and other skills that don't show up on my resume). And from him I learned that the virtue of the fisherman is patience.

The Fisherman waited. Now he's back. He's in Infinite Crisis #1. The Joker, Magneto, and Darkseid aren't.
Posted by Scipio at 9:46 PM

Who's he caught in the pic?

A GCPDer; I don't think it's Montoya because she appears elsewhere in the following frame.

When I saw the destruction of the Rock of Eternity and the Death of Shazam in Day of Vengeance, I thought it was odd that it happened while the Rock was over Gotham.

The Joker's persistent lack of a real name?
Stolen from the Fisherman.

If they ever do give the Fisherman a real name, I bet it'll be Gorton...

A dark and gritty Fisherman with too much shading! Just what the world needs!

There was a golden age villain named the Angler.

I think Kang has some boots like that, too.

They brought him back? DAMMIT!

There goes my revamp idea.

Did you notice they killed the Fisherman? In Gotham Central.