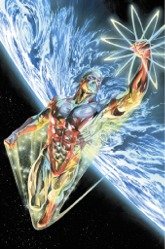 As a comic book reader, I am so unprepared!

I don't like Captain Atom. I know nothing about "the Wildstorm Universe", other than the part of it, the W.I.L.D.Cats, is usually the punchline to some joke by people who read more comics than I do.

So, you'll forgive me if I was unprepared to enjoy Captain Atom: Armageddon.

I should not have been unprepared, because I seem to like the writing of its author, Will Pfeiffer. At least, I really liked his revitalization of the nearly dead (but iconically huge) Aquaman.

In one or two pages, Pfeiffer explains Captain Atom's origin, gives him an actual personality, positions him uniquely in the DCU (right before he leaves it!), explains the backstory to his current situation and takes it somewhere. That page or so did more to interest me in Captain Atom than everything else published about him in the last 20+ years since he was acquired by DC from Charlton.

Pfeiffer introduces the characters of the Wildstorm Universe, well, without introduction. They are simply there, doing what they do, confounding Captain Atom and me. That utter lack of exposition is refreshing, intrigues me into trying to understand the world Cap't A finds himself in, and pleasantly forces me to identify with Captain Atom.

Captain Atom's charmingly naive comment, "I won't hurt you; I'm a superhero!", and the reaction it gets perfectly communicated the difference between the DCU and Wildstorm. I think that's one of things I like about Pfeiffer's writing: he uses the story to convey information, instead of conveying information in order to tell a story.

I have no idea who Giuseppe Camuncoli is, but I love his art; beautiful stuff. The fact that I've never seen it before creates what is, to me, a unique look for the Wildstorm Universe; that's almost reason enough to stay tuned.

I don't know whether you will like Armageddon; but I did.
Posted by Scipio at 12:03 PM

He did The Batman issues to the sequel to War Games, before that he was on The Intimates with Joe Casey.

Is this, as some are theorising, the first step in a move to integrate the Wildstorm Universe more into a post-Crisis DC Multiverse? Perhaps as Earth-W?

Well, after reading the example pages, I'm definitely going to pick this up. I wasn't exposed to Captain Atom (outside of his little cameo in Kingdom Come) until last year, during his "holy-bejeezus" fight scene in Cadmus Labs with Superman. Say what you will about JL:U, they know how to make fights feel TITANIC.

There's something pleasant about heroes who aren't afraid to blast an opponent point-blank IN THE FACE.

The fight was even better for tearing holes in the building in which Huntress was gymnasto-fu-ing her way to Question. Brilliant juxtaposition of two godlikes with two street-levels, diminishing the impact of neither pair.

"Gymnasto-fu" is my new favorite verb.

You may get into
Wildstorm Universe, but
Armageddon out.

Thank you Absorbasconites! I'll be here all week!

Heh, heh, that was great Bully! I'm a sucker for bad puns.

Am i the only one who read Cap'n Atom's origin and thought 'this reminds me of JMS's Doctor Spectrum'?