Okay, I'll admit it. While Golden Age Starman is incomparable, it really can't give you the sort of stuff you get regularly from the Silver Age Superman: 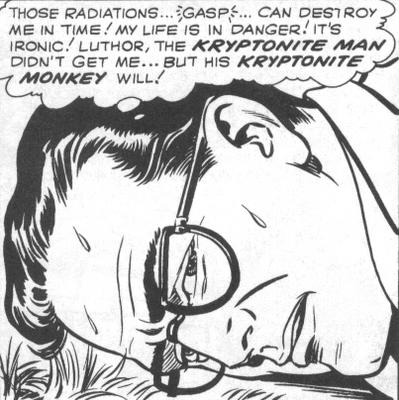 Oh, the Comic Book Irony! Lying face-down in the dung-strewn grass in a filthy, hidden corner of the Metropolis Zoo (because apparently Metropolis, despite having eternally sunny and sparkling clean alleyways, has a children's zoo with dark recesses where a man in a nice blue suit and red tie can lie unnoticed dying of radiation poisoning without attracting the attention of any passersby, and whose administrators think nothing of putting in their petting zoo a glowing green monkey they found on the street), Superman is being killed by the proximity of an innocent but deadly Kryptonite Monkey, an abandoned test animal of his arch-enemy, Lex Luthor.

Starman may have invented Comic Book DRAMA, but Superman is the ultimate source of Comic Book Irony (which in his last moments amazes even him --"It's ironic!"-- you'd think he'd be used to that sort of thing).

Superman was saved by a passing child whose banana fell down a nearby lead drainpipe.
Posted by Scipio at 10:09 AM

My second thought: Clark was going through kryptonite-withdrawal and trying to get "the kryptonite monkey" off his back.

Everybody's got something to hide, 'cept for me and my kryptonite monkey.

B/W is the deal breaker for me, though

Nonsense! Thanks to super-exposition, every character tells what color something is whenever it's relevent, so no real information is lost.

And they're cheap enough to buy for the kids as coloring books...

::puts away the Crayolas::

...so Clark is lying face-down, sweating and visibly unconfortable. What the hell is the Kryptonite Monkey DOING to Clark off-panel?