This just in from the world of Heroclix!

The following figures are confirmed as being in the forthcoming "Collateral Damage" set of DC Heroclix. 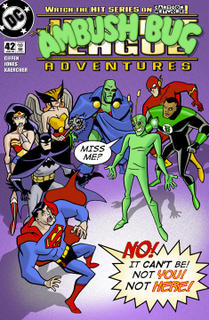 Zowie! I like the looks of it so far. While I'm no fan of Ambush Bug -- never have been, never will be -- his inclusion in the set sends a strong signal of the "new DC" attitude: we don't WHAT it is, if it's in the DCU, we will give it love... and maybe you will, too!
Posted by Scipio at 10:52 PM

And no character has ever had such a rogues' gallery:

Cheeks the Toy Wonder and his many deaths!

Ye gods, I loved those books.

I don't think I'm able to convey to you how surprised I am that you're not an Ambush Bug fan, Scipio. I feel hurt, confused, and not just a little frightened.

He fears competition. Ambush bug was dissin' on the more embarassing parts of the DC Universe before the blogosphere willed itself into being...

Actually, come to think of it, Irwin was filled with massive self-hate. How can we be sure Scipio isn't actually Ambush Bug in disguise? Has anyone seen them both in the same room together?

I demand proof of an Ambush Bug clix. I need to see it with my own eyes before --

I don't dare let my hopes get up that high. Ambush Bug? Don't toy with my HEART, man!

You don't like Ambush Bug? Come on, man; what did the Bug ever do to you? Don't be a hater, Scipio.

Amy, Ambush Bug is on the Boneyard Confirmed Figures list on the HCRealms Boards.

Irwin Shcwab always has been and always will be my hero.

Incidentally I picked up a copy of DC Comic Presents #52 out of the bargain bin and was shocked, nay appalled, to see Ambush Bug in one of his early portrayals as a villain. He actually murdered a guy! It left me quite shaken.

Is that JLAdventures cover for real? If so, I must have it.