Batman's rather Traciesque Rogues' Gallery (and if you don't believe that, go look up Haf-n-Haf who first appeared in 1931).

A gangster needs a gang! And Two-Face needs one more than most. While Two-Face is certainly always disturbing (in some ways the most disturbing of the Bat-enemies), he's not always as threatening as we need him to be. Brilliant and sturdy though Two-Face is, Batman's basically fighting a burn victim with a law degree. While others sport freeze-guns, mind-controlling headwear, and exploding whoopie cushions, Two-Face carries ... a gun. Let's give the man some back-up, shall we?

The Joker's themes (clowns, humor, cards) are more style than substance; he's not really known for stealing objects or planning capers around his themes. The Golden Age Penguin used go pretty heavy on the themes (birds and umbrellas), but lightened up dramatically after the Crisis.

But Two-Face, as we all know, is really big on "theme"; always has been. He would definitely have lieutenants who shared one of his themes (the number two, justice, chance/fate, gambling, the coin). So I'm picturing: 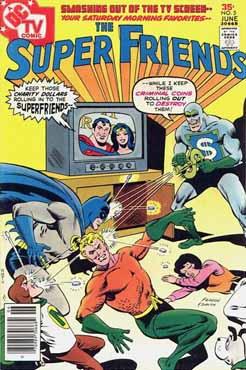 Double Dare and The Body Doubles (already foes of Nightwing and classic examples of Free-Range Sidekicks)
The Trigger Twins (foes of Robin)
The Penny Plunderer (*sniff*, I love you, Joe, no matter what they say)
Hazard and her brother, The Gambler,
Jinx and Amos Fortune (if you play Heroclix, you know the value of "Probability Control")
The Bad Samaritan (which would keep me from donating him to Marvel)
Larry the Judge (Tec #72!)
a moll named Penny or Silver (gotta have a moll)
and for some comedic costumed chaos, Dollar Bill (surely some of you remember Dollar Bill!)

Anyone else?
Posted by Scipio at 3:11 PM

How about long-forgotten Golden Age Batman foe Mr. Roulette? And for the "twin" theme, one-time Green Lantern foe Incinderella? There was only one of her but she vacillated between two outfits: the threadbare rags and the princess outfit. Sounds like Harvey's fodder!
Heck, Harvey might even recruit the current Icicle, foe of the JSA, as he is the second criminal to use that identity!

Hm, how about the Shazam villain Chain Lighting... one body, four personalities... what a bargain!

PLEASE tell me you are making that up, Dale...

I only wish I were. She was part of a gang of really stupid villains Green Lantern fought during his series in Action Comics Weakly.

There's always the gang that Bob Rozakis gave him back in the '70s: Flamesplasher, Darklight, and Sizematic (6 for the price of 3!). And he could reconcile with his estranged daughter Duela, who's had more personalities than dear ol' dad could ever dream of.

Why not use that Morrison member of the Doom Patrol that had the metagene and multiple personality disorder... every personality had a different power and some of them were villains I think.

You know, if that idiot on the Super Friends cover was using a real gun with real bullets, both Aquaman, Marvin, and B Batman would be DEAD by now.

Think of the street cred.

It cannot have effect in reality, that is what I consider.
larger | gold chains for men | car dealerships in joliet il | detroit bars | limousine service in atlanta