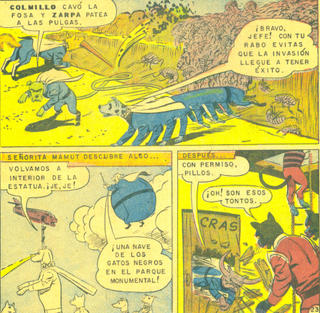 It was, as readers of El Blog de Jotace know, even funnier in Spanish.

Created by the Enlargement Ray of a band of black space cats, who are evil (well, of course they are).

Hiding in the hollowed out cranium of a

giant statue in the memorial park of giant statues of space dog heroes.

Discovered by a dog who was the girlfriend of a dead space dog hero with the same super- self-inflation power as she.

As predicted by a megaloencephalic precognitive dog with super-Powerpoint powers.


Oh, I hear you. You're saying, "Gosh," because people who read Silver Age comics say things like that, "most of that kind of thing can be found on the Krypto the Superdog cartoon currently on the air. It's the Silver Age all over again (for good or ill)!".

But you're WRONG. Huh; amateur! Poseur!

This is real Silver Age, buddy. Because this story has... 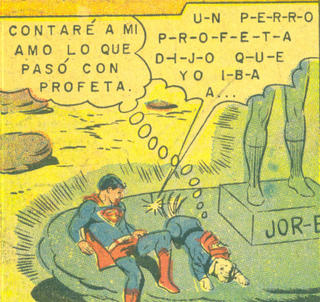 Tail-thumping in Morse Code. In the Silver Age, everyone knew Morse Code. Everyone. Even dogs. So well, in fact, that they could communicate with it while dying of radiation poisoning.

Giant props. With names. You know, if I ever buy a giant inflatable hot dog, I'm going to name it "Weldon". I said IF, people! 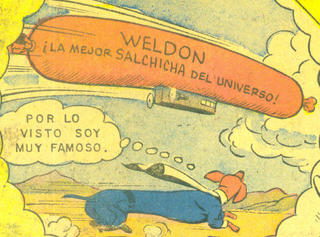 But the REAL KICKER is the special guest stars, who inspired the entire evil plot (uh, whatever it is) to begin with:

The cats of the Kryptonian criminals who've been imprisoned in the Phantom Zone.

Let me repeat that for you.

The CATS of the Kryptonian criminals who've been imprisoned in the Phantom Zone. 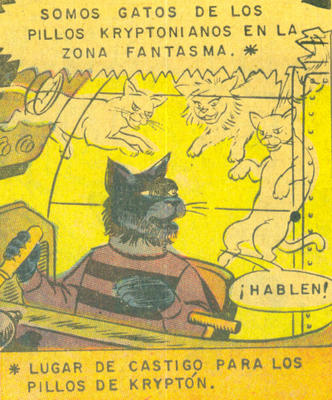 "Rather than execute you, we will doom you to an eternity of incorporeal existence in an endless, pleasureless grey wasteland .... WITH CATS IN IT."
Posted by Scipio at 8:14 AM

Any comic, movie or book with dachshunds in it automatically makes it better. If said dachshund has super powers, then even better.

I miss the Silver Age.

I agree! I am a Dachshund owner myself!

My family used to breed them.

Hey, Jor-El wasn't totally heartless: how cruel is it to spent eternity discorporeal without your trusty pet to accompany you?

Is this the Space Canine Patrol btw?

"Trusty pet"? What does THAT have to do with CATS, for goodness' sake?

Note that Kryptonian criminals have CATS, not dogs.

Who could ask for more?

I now find myself quite uneasy when alone at home with the cat. She's plotting something, that I'm sure of.. but what?!? And when will she strike!?

Whatever she's cooking up, I know it's diabolical.

Turn off EVERYTHING that makes noise in your apartment.

Sit very still for a long time in the middle of the night when your cat is awake.

You just may hear the whisperings of the Phantom Cats of Krypton...

You know, when I'm completely honest with myself, the idea of the Phantom Zone being filled with evil housecats is exponentially more terrifying than it being populated by bald, fat, white guys in military jumpsuits. And they speak spanish!! It's almost too sinister to bear!

I wonder what General Zod's cat is named.

Zod's cat is named Zreist. He sitteth at the right hand of Zod.

That's the most beautiful thing I've ever seen.

So...Kryptonian cats wear clothing and pilot spaceships? Were they not evil, I would recruit one to pilot my ship!

Now if they ONLY published it in Spanish, THEN it would be perfect!

Add me to the list of people who love the idea of evil kryptonian cats as villains in the DCU. They must be brought back with this new infinite chrisis.

Space cats versus Krypto and/or Superman is too obvious, though. I want Grant Morrison to write a story with Batman versus an army of kryptonian cats loose on Gotham, with Catwoman coming in to try and separate the combatants.

I'm sure Batman already has a plan labelled "Gotham overrun by supercats", so they'll have to throw a twist in somehow.

Hold on, gang! The cat in the suit is NOT Kryptonian. He's just your average hyperintelligent, ship-piloting evil spacecat.

The only remaining Kryptonian cats are the sinister gatos de los pillos de Krypton en la Zona Fantasma, whispering plots into the ears of living cats who become their tools of vicarious revenge.

What did you THINK your cat was staring at...?

But, yes, they should haunt Catwoman and Krypto both.

I hadn't yet added the Absorbascon to my daily diet back when this was originally posted, and I see now it's a good thing (because how could I be expected to go about the entire fall semester properly while evil space cats were constantly on my mind?? And along those lines, what are you going to do about the fact that I've seen it now, when the entire spring semester looms ahead?). Can these Phantom Zone cats be cuddled into submission? Has anyone volunteered yet to try it?

Wasnt krypto in a league of super canines modelled after the lsh whose counterpart were a gang of evil space moggies? Krypto's team had Tusky Husky, i think, and a dog who could elongate and use his tail as a lasso. best of all, they even had a motto: "big dog, big dog, bow wow wow, we'll stop crime, now, now, now!"

I cannot verify any of this.

Homer: I want to tell you about the most wonderful place in the world: Doggie Heaven. In Doggie Heaven, there are mountains of bones, and you can't turn around without sniffing another dog's butt! And all the best dogs are there, Old Yeller, and about eight Lassies.
Bart: Is there a Doggie Hell?
Homer: Well… of course, there couldn't be a heaven if there weren't a hell.
Bart: Who's in there?
Homer: Oh, uh… Hitler's dog… and that dog Nixon had, what's his name, um, Chester…
Lisa: Checkers.
Homer: Yeah! One of the Lassies is in there, too. The mean one! The one who mauled Timmy!

Sorry -- this story triggered a Simpsons quote-memory. Damn, if the whole idea of Phantom Zone Cats isn't the best thing EVER.