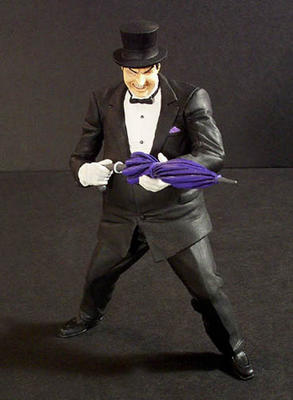 As we did recently for the Joker, I want to compose a gang for the Penguin. I suppose it's more of a mob, really; after all, the Penguin has substantial organized crime interests to be maintained, along with legitimate businesses.
The Penguin is fairly unique among Batman enemies. For one thing, he's sane! He's been everything from a JLA- battlin' supervillian to an unscrupulous but legitimate businessman. I've seen him fight Firestorm to a standstill yet get beaten up by Harvey Bullock. I've seen him kiss babies as a mayoral candidate and sell them into slavery as a crimelord. The Penguin is a renaissance villain. Unless, you're in Vertigo or the 3oth century, there's always a way you could fit him in your story if you wanted to.

So, the Penguin needs lieutenants of the same ilk, not just a bunch of superpowered nutcases with bird names. And they need to have specific roles in his criminal empire, like so...

Most of these guys could pass in legitimate society; Killer Moth, the Monocle, the Cavalier, and Count Vertigo are rather high society, in fact, and just the kind of people the pretentious Penguin would want to surround himself with.

The Monocle, back from Limbo thanks to Identity Crisis, need something to do. Anyone who can turn a friggin' monocle into a weapon is obviously an armament genius, so he's in charge of adapting weaponry for use or re-sale.

The Cavalier; okay, apart from the horrible pun, fencing does make sense for him. He's a high-class millionaire who knows where to get valuable items and who will pay for them. Besides -- who do you think taught the Penguin how to swordfight with an umbrella?

Mr. Freeze? Some may bristle at the idea of a villain as important as Mr. Freeze working for someone else. Just think of it as his dayjob; he's a subcontractor. Victor makes mayhem with the best of them, but his activities don't usually seem very profitable. Cold-suits ain't cheap, so someone's got to be paying his bills. Freeze was a brillaint scientist and I'm sure the Penguin could come up with projects for him. Besides, thematically, I love those two guys together. 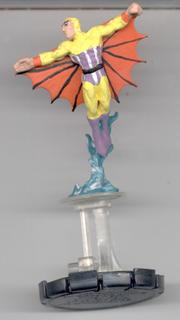 Killer Shark you probably don't remember, but he's an Aquaman foe, a smuggler (dressed in a shark costume, of course). What a perfect choice to head up the Penguin's smuggling operations and cause some occasional conflict with Aquaman. It also allows for appearance by a host of sea-scavengers, including Black Jack, Orca the Whalewoman (you're welcome, Devon!), and THE AWESOME HUMAN FLYING FISH.

Someone should be putting Firefly's destructive talents to good use, and the Penguin is the man to do it. And who else is going to give a snooty foreign ex-con like Count Vertigo a job, huh? Headquartered now in Bludhaven, wouldn't the Penguin use a little local muscle as a bodyguard? So Nightwing's foe Brutale gets a job (as does any other killer, for a fun guest star).

Black Mask is cute and all, but having him "run the Gotham Underworld" when there are people like the Joker and the Penguin around seems, well, temporary at best. When Black Mask falls (if his latest drubbing by both the Joker AND Batman isn't already his end), something needs to replace him, and I think coalitions like the ones I've described for the Joker and the Penguin are just the thing. Think of them as mini-Secret Societies...

...and if Penguin becomes king of the Gotham underworld, and based on everything else you've suggested, clearly he should be able to stand toe-to-toe with Luthor.

Only problem with this mob is that the Monocle was dusted off on Identity Crisis with the only purpose of being killed on the actual (volume 3) Manhunter series, it was on issue 9. See, they don't bring it back these old time villains to tell good stories. The only reason they bring back these characters is so that the "superheroes that kills" like Manhunter, can have people that are safe to off.

Also the info about Monocle death was on a very interesting page:
The Books of Morbidity

It would be fun to make a meme or something like that were people name 10 people they would ressurect from these lists and why.

PFtt! As if "Manhunter" is going to be gospel, when about 12 people are reading it!

Besides, all it takes a monocled wearing relative, and, voila, "the Monocle II".

Actually, Ron, I assumed that after Luthor embarrassed the Penguin in No Man's Land, DC would do the logical thing and have the Penguin run for mayor.

As he did in the TV series, the animated comic, AND the movie...!

What is most sad about Manhunter is that this title is still surviving while Bloodhound, that have the same feel but they was a lot better. Besides I think Bloodhound would be a much more interesting place to Agent Chase of the DEO than Manhunter.

Speaking about titles that have the same feel that I would like to see paired my favorite would be a crossover of Suicide Squad, the one from the Ostrander run, with JLA Elite. A second place would be a Chase /Bloodhound.

PS.: The verification word? Hussbh. Now, they are just spitting...

But I would support a Monocle II more than the original Monocle. I mean, is finally the chance of they doing a english Lord that while still having the aristocracy air to him, would be more like the present day nobility than the 18th century one.

I'm with Devon on this one (kisses, Devon--Miss you!). Manhunter is a good title. A little grit and a few strong women. Throw in a sex-crazed amoral helper and (to qoute Scip above) "Voila!", a good time. I did also enjoy the Bloodhound series. It's Breach, which I haven't read, that I resent for Bloodhound's cancellation.

Any particular reason that the Penguin Syndicate is a boys' club? Shouldn't at least some of his operations require a woman's touch?
I notice nobody's runing gambling...Roulette could work quite well there.

Also nobody running prostitution, but I can't think of any obvious choices of either gender there...

>> Also nobody running prostitution, but I can't think of any obvious choices of either gender there...<<

That's what makes me think that "donating" Lashina to Marvel was a hasty decision. What did you get in return, hah? Not Dazzler, I bet.

I was re-reading this excellent article when I remembered that In Deadshot's first appearance in the 70's he escaped by stealing the Penguins monocle laser and cutting himself out of jail.