Necktie-based humilation techniques are vastly underrated as a means of torture, just as repetitive petulant nagging is undervalued as a method of interrogation.

But Dr. Domino knows this: 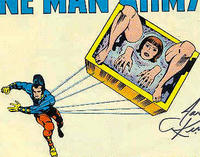 Horror, the Bacteria Cloudburst Formula, which Dr. D calls by the charming pet name 'BCF'; part of the fun of being a villain is treating Weapons of Mass Destruction with an unsettling familiarity and watching people squirm) by encasing him in concrete and dumping the resulting mess in the Bosporus off Istanbul.

Now, I like to imagine that Prof. Zuni worked at, say, CalTech, Bell Labs, or STARLabs -Waukeegan (you know, some place where Weapons of Mass Destruction are made without government funding or involvement) and that after Doc D concretized Prof. Z, he had his skull-capped minions haul him across country to his waiting battleship, then sailed to the Bosporus off Istanbul to dump him there simply because it was so much cooler-sounding than hefting him into the nearest landfill.

Did I mention that Domino was Dr. Evil's roomate at Evil Medical School? He was.

Anyway, because Prof. Zuni had sold the formula to trouble-shooter diplomat Mr. Tracy (Can't you just hear the UN Accountants at audit time: "Ah, Mr. Tracy, this $1 billion line-item for 'Weapon of Mass Destruction (WMD), type 'Bacteria Cloudburst Formula' (BCF) ... can you verify that this is a work-related expense and not one for personal use?"), Dr. Domino had to sail his battleship all the way back to New York City to try to squeeze the info out of the Dashing Diplomat. Being a supervillain is very time-consuming.

At this point, you may be asking, "Why didn't Dr. Domino just get the formula from Prof. Zuni before he killed him?" Well! It's pretty obvious why you didn't get into Evil Medical School, now isn't it? If you're going to take the easy way out every time, then you're no better than a Nameless Underling.

So, ANYWAY, because we all know what a necktie symbolizes for a man, Dr. Domino's manhandling of Tracy's well-traveled cravate is a humilating exercise in emasculation, backed up by the two salty seamen Domino hired from the Tom of Finland Temp Agency to watch him do it. At least Dr. D is wearing gloves; I still feel dirty just looking at the scene. Thank Zeus Wonder Woman is unconscious, or the whole thing would be simply unbearable. Do not mess with Dr. Domino, Master of Psychological Warfare.

Patience, however, is not one of Dr. Domino's virtues and he is very busy with the time-consuming business of being an object-headed supervillain. How do we know this? He says so, in the next panel, after he gets tired of saying "Talk! -- Talk! -- Talk!":

So, after only one panel of necktie-yanking, Dr. Domino moves on to Plan B....

Villains! *sob* They're all pigs!

Tracy! I've no time
to waste breaking you down! But --
There are OTHER ways!

Damn letterists... always getting the line breaks in the haiku wrong.

you spoiled the surprise...

With a bit of snark
I have stolen your thunder.
For this, I'm sorry.

I expect a man
with a game piece for a head
has more evil yet.

Will there be something
New for us to write about
On haiku Tuesday?

Why'd you include the picture from the cover of OMAC #1?

Man, put together that cover, MODOK and Arnim Zola, and you've got a psychology paper on Jack Kirby and body images just waiting to be written.

I'm sure somebody has already.

Back on topic, Dr. Domino is a pig, yes, but don't pretend you don't love it.

The OMAC picture is evocative of concretizing and dumping of Prof. Zuni, that's all.

Six-spot for a head;
"Evil has a new gamepiece"
Should be film tagline

Is Dr. Domino, in fact, a medical doctor? Or is he a PhD in Game Theory?

The "Talk! -- Talk! --- Talk!" bubble is in the wrong place in that panel, I feel. I read it as coming after "used" and before "Mine is," thus breaking up the dichotomy of the "your mission was" and "mine is" panels.