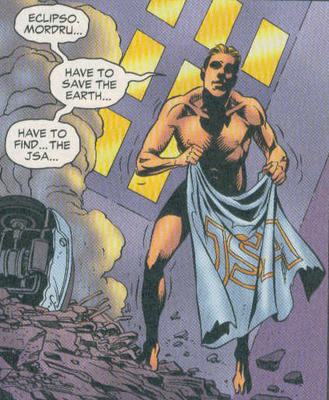 Sanderson Hawkins, a.k.a. Sandy the Golden Boy, a.k.a. "Sand". You probably don't think about him much.

He was a hero in the Golden Age. In the Silver Age. In the Modern Age. And in this panel you get a glimpse of what kind of hero he is.

Just brought back to human form after saving the earth from cracking into pieces at the cost of the cohesion of his silicon form, naked, dazed, confused, and about to fall unconscious into the arms of a comrade, Sand still remains focused on his mission, his team ...

and his Heroic Haiku.

"Eclipso. Mordu.
Have to save the Earth. Have to
find the J S A."

Gods, that's inspiring! Most of us would have just spit out "Grk! Ack! What th-- Oohhh!" before falling over face down in the rubble. You can tell this guy knew the Golden Age Starman! And his boss, the original Sandman, used to compose little poems all the time, designed to upset evildoers. Clearly, Sandy was a good pupil and remains a true hero.

What haiku can YOU compose in honor of the poetic heroism of Sand on this occasion?
Posted by Scipio at 7:29 AM

No time to get dressed!
Off to fight evil with flag
Strategically placed!

Just a point of order here. Sand aka Sandy aka that naked guy never appeared in the Silver Age. His first modern appearance was JLofA #113, 1974; Bronze by any metallurgy you use.

Bad guys are coming!
Only one way to stop them:
Naked Bullfighting!

Kids, if you must drink
Don't drink and drive while naked
Bring a beach towel

And in showbiz news:
Sanderson Hawkins will be
Played by Ben Affleck

You guys are KILLING me!

Excuse me, Courtney?
Want to see my Cosmic Rod?
Quit screaming you brat!

Flag around my waist
Does "JSA" really mean
"Just showing ass?" No.