On today's episode of
"The Loneliness of Aquaman Week":


Thanks to his aquatic telepathy,
Aquaman knows what it feels like for a fish. 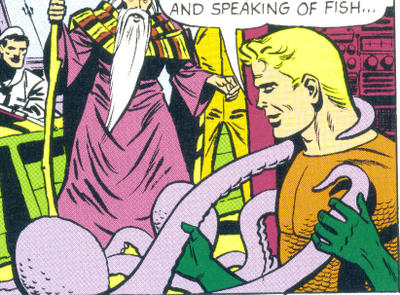 Oh, I don't blame poor lonely Aquaman
or even the octoprostitutes themselves.

I blame the bearded maritime pimps
who profit from their desperation.

Nice legs on those octiprostitutes. I wonder how many clams that set Arthur back?

I don't know, but he probably got crabs from the experience.

Calm down, I don't like the TUNA your voice.

I just leafed through a Peter David Aquaman issue yesterday. He fought a villain named Rhombus.

Rhombus. Come on people. How can you defend this guy?

He's just another lonely four-sided shape making his way through the ocean?

Scipio, wasn't there any way a round that pun?

Mmm, not from my angle, Dale.

See; I could write Aquaman as well as Peter David...

I cone not believe you said that.

I'm in no shape for bad punning.

You might say the curse of bad puns has us all in hex-agony....

We're all peas in the same octopod.

"But I Digress" was seriously annoying much of the time. Who gives a flying fuck what Peter David thinks of "Lawrence of Arabia"?

I never read his version of Aquaman. I just assumed it sucked like his Supergirl did.

"Well, I really don't like this character at all, so I'm going to turn them into a completely DIFFERENT character with the same name, and pretend that it's character development instead of character assassination."