All he wants for Christmas is the Bacteria Cloudburst Formula, a chemical Weapon of Mass Destruction. Why? Extortion? World domino-ation? Pesky aphids in his lawn? We don't know.

Instead of getting the formula from the scientist who invented it, he kills him and sails half way around the world to try getting it from the guy who bought it, a smarmy diplomat. What, is the formula in the guy's wallet? Did a diplomat memorize the formula for a chemical weapon?

When, after a little tie-yanking, he can't get the info, he has a hissy fit and straps a nearby unconscious superhero to a NUCLEAR MISSILE. Yes, Dr. Domino desperately wants a Weapon of Mass Destruction because all he has now is a battleship full of nuclear missiles. How much potential for mass destruction does one guy need? 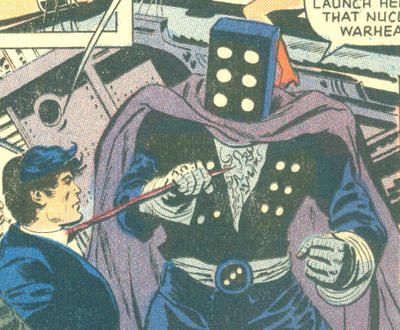 Where do supervillains get battleships full of nuclear missiles, anyway? Wal-Mart? Aurora Models? Admiral Fangschleister at the Pentagon?

And, well, I've been too polite to mention it before, but ... have you noticed there isn't actually any room in the domino for a human head? Defying logic is one thing; defying topology and biology is quite another. Is he, um, a robot? Yes... yes, that must be it. Nice belt, though.

His head isn't a domino, you know; a real domino has two sets of pips on it. Shouldn't he really have called himself "Dr. Half Domino"?

Maybe ... Half is his first name? Sounds Swedish. 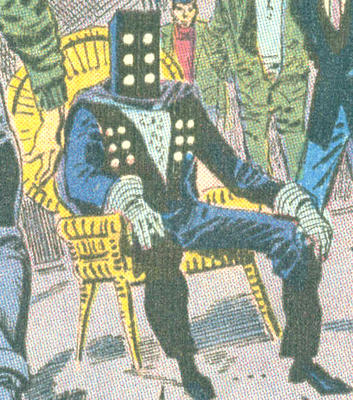 Makes sense; the battleship's probably Ikea ("the S.S. Borgholm"). It's a big world, but someone's got to dominate it.

While he and Per Degaton were shopping at Ikea, couldn't he have found a more stylish World Domination Throne? Instead of buying some fun off-white egg-shaped thing named "Gubbo" that would highlight his fabulous outfit, he stopped off on the way home at Pier One's semi-weekly wicker sale. Did Kirstie Ally convince you an unfinished wicker cobra chair looks good on the deck of a battleship? That woman has much to answer for.

I mean, it's not even painted white. It's okay if you're just sitting there in your ruffled tuxedo, mummy gloves, purple opera cape and domino head (mask?) working on your tan, but face it, Half: people do not conquer the world from a wicker chair. Because, even if they do, they still get laughed at (and probably pelted with wooden games pieces by derisive eldery Cuban men). 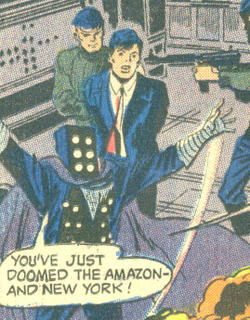 The sad part is, all this unpleasantness probably could have been avoided if he'd just gotten that gameshow hosting job he wanted...

Still, at night, after the Dominominions are snuggled in the hammocks below deck, Half sits in his wicker throne, staring at the night sky and fuming inwardly:

"Damn you, Cluemaster. Just wait till I hit you with the Bacteria Cloudburst Formula! That ridiculous face-kerchief won't save you then!"
Posted by Scipio at 12:19 AM

So Dr. Domino is some sort of Dr. Doom style despot that shops at IKEA and Pier 1 Imports?

That could make him a good villian for Wonder Woman then, game-piece headed despot of Dominia versus the warrior Ambassador of Themis... Themys... Paradise Island. Who knows what kind of trade problems those two nations have had over the past few decades.

Except without the country of his own.

You are just not getting it, Scipio.

His suit... is really a robot exo-suit, with a rectangular slot in the chest to slip dominos into.

We only see his face... because he uses his other face to operate the robot from inside. (Or maybe he is ashamed to show his other face. Maybe a lowly one pip, trying to act all haughty double-six. Maybe a blank. Hm, blank, black, rectangular obelisks... Is he a disfigured 2001 monolith? Can monoliths get acne? Being a teenager would certainly explain his emotional swings and lack of planning skills...)

No, he is not a robot. Is just that his head mutated after being bitten by a radioactive domino piece.