The Riddler. Naturally, we all think of the Riddler as a loner (hey, they even 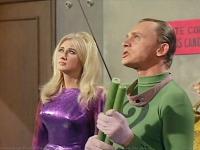 call him that in his DC Encyclopedia entry). After all, his M.O. almost precludes working with other villains. You'll remember that the Riddler seemed a bit out of place in the Legion of Doom, not so much because he was powerless, but because you almost got the feeling he was ratting out his colleagues with his "super-riddles".

But, as is so often the case in life (and certainly in Riddler stories), when we combine this riddling problem with another one, we get a solution. The other problem? The things the Riddler (and any other villian like him) does don't seem very profitable. On his last two outings that I've read, he stole an unsellable ancient manuscript right in front of Batman and beat the snot of Green Arrow. That may be loads of fun (particularly the Green Arrow part), but it don't pay no rent, folks.

The obvious conclusion? That's not his work; it's his hobby.

He (and any other villain whom we usually see stealing "priceless Etruscan snoods" or the like) make their millions in off-camera, less dramatic crime. That's how they buy giant jigsaw puzzles, super-instant-mesmerizing top hats, and flying fiddle-cars. Like regular people, they go to work, so that they can support themselves and their hobbies.

But isn't being a supervillain a stupid, self-defeating hobby, whose primary results are batarang scars on the back of your neck, a prison record longer than Plastic Man's arm, and a hefty monthly bill from Paul Gambi?

Nope! As Will Pfeiffer hints at in this month's issue of Catwoman, the "hobby" of supervillaining isn't just fun (and it is "the most fun you can have with your clothes on", as Catwoman puts it), it's useful because it gives you street cred. If you've faced a superhero (regardless of the outcome), you earn the respect and fear of everyone else in the criminal community. That kind of cache can't be bought and allows you to muscle in or pull off jobs that an ordinary crook could only dream of.

Is a criminal of even average competence going to be inspired to follow a badly burned attorney, a fat guy dressed like Uncle Moneybags, or a corny chemist with a skin condition? No. Will they clamor to work for Two-Face, the Penguin, or the Joker? Yep. Street cred, folks. The criminals want it and the villains have it, thanks to their "silly and unprofitable" confrontations with heroes.

And people think they're crazy. The fools, the utter fools!

So, why wouldn't the Riddler work with like-minded, smarty-pants villains making millions, so they can all finance their individual confrontation with various heroes? Fraud, identity theft, white collar crime, insider trading, blackmail, cover-ups -- the Riddler-centric gang below would have plenty of work to keep them in the green while they pursue their quizzical hobby of confounding the Forces of Good. And (like the Joker's gang imagined in an earlier post) enough personnel not to fall apart if a couple members happen to be

in jail that week or recovering from heat-vision burns.

The Gamester (who fought the spectacular Sea Devils and needs to become Aquaman's Riddler). Yeah, so what if he probably died in that "Man-Fish" story? No one read it anyway. Give the man some floating gambling casinos and you've got a maritime buddy for the Riddler and another foe for Aquaman (who can always use another "old foe").

The Puzzler (no, not from the Batman TV series; the woman who stymies Superman). She's a redux on the original Golden Age Puzzler who looked, well, very much like the Toyman.

Writers knew how to deal with Superman in the Golden Age; they gave him societal problems and intellectual villains that couldn't be licked by simply throwing a car around (the Puzzler, Mxyzptlk, the Prankster, J. Wilbur Wolfingham, the Ultrahumanite, Lex Luthor). Anyway, perhaps she could be a love interest for one of the others in the group?

Everyone's favorite psychopathic hunchback, Dr. Riddle (who stumped Bulletman, which I'm sure must be terribly difficult). Not the smartest member of the bunch, but he's the creepy one you send to scare somebody. Little children, I should think. 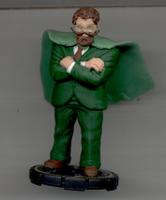 The Golden Age villain Mr. Who, with some toning down of his powers, would fit in and add enormous muscle to the team (with super-strength, regenerative abilities, and chameleon powers). His colleagues could help him use his powers to actually make money instead of just looming over fairgrounds, crushing statues, and fighting Dr. Fate. They could also get him a make-over and a nicer outfit. Yeesh.

The Cluemaster (who's apparently cool now). Our Mr. Brown would have a legitimate function; heroes always look for clues and always find them. Arthur would simply make sure the clues led the wrong way. So what if the Riddler once strapped a bomb to his chest? No one remembers that s 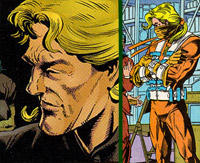 The Spellbinder is a traditional Batman villain who relies on disorienting, confusing, and deluding people. She had a rather successful outing against Batman after she got her powers from Neron, but hasn't been seen since. Her brand of mind-games would spice up the gang considerable and be viciously effective under the direction of someone like the Riddler.

Hey, what about Miss Terry? She's pretty hard up for work since Mr. E went round the bend. Let's have her turn to crime and act as secretary to this busy little group. Although she'd play a secondary role, in some ways she'd be the smartest one (next to the Riddler) because while they occasionally go to jail, she does not.

Naturally, Query and Echo will remain. Not only because they are fabulous, but because if the Riddler tried to fire them, they'd beat him up.

And, last but not least, Quiz Kid (correctly spelled, however). "Real" Robin desperately needs this fun-filled Junior Riddler introduced as a rival in the Teen Titans, Go! #15. The Riddler would be great with a kid sidekick!
Posted by Scipio at 7:55 AM

Okay, why do the women have to be love interests and secretaries? That's why its so hard to build a dynasty around cool characters like Black Canary or Oracle. These women always turn out to be secondary.

For that matter, with the Riddler's new makeover, (all black with short hair and no hat, with the tiniest question mark tatoo on his face) why does Riddler need a girlfriend and not a boyfriend? Perhaps his maritime friend could be more than that?

I'm not so sure about this lineup, Scipio. The Riddler riddles his riddles because he thinks he's smarter than everybody else, and because he wants to prove his superior intellect by humiliating them (by frustrating them with hints they can't POSSIBLY figure out).

Surrounding him with other smart guys who might challenge his alpha-brain status (like Calculator) or Riddler-ripoffs (like Cluemaster, who the Riddler would have to hate on sheer principle - he's stealing his shtick and doing a lousy job of it) doesn't make sense. The Riddler WOULD want stooges who (1) aren't nearly as brilliant as him, (2) can still appreciate his genius, and (3) compliment his riddle-theme. Query and Echo fit here obviously, as does Quiz Kid (because his junior status doesn't threaten the Riddler's superiority complex), and the Spellbinder, who is an inspired choice, and whose presence could mix things up with some treachery (she got her current job by killing the previous Spellbinder, back when she was his Forgettable Moll).

Well, until recently (this big Villains United Behind That Brain Molesting Those Bad JLAers Did thing), the cardinal rule of all villains, not just smart egotistical ones like the Riddler, was THEY DON'T WIN BECAUSE THEY DON'T GET ALONG. In the past, villain groups have nearly always split apart from attacks on the outside and the inside.

That's why the hierarchy is so important, I guess.

I've never been prouder than I am now, having an issue of CATWOMAN cited on The Absorbacon.

Will, dude; your stuff ROCKS!

Every single one of your Aquaman issues is a treasure to me.

You understood EVERYTHING that needed to be done. You made Aquaman the central character in his own story. Unlike other writers, you let him be himself instead of trying to make him into some other character (angry pirate guy, King of Camelot Under the Sea, Aquarian Avatar, blah blah blah). You also clearly gave thought to how life under water would actually have to work, and you got rid of the "everyone must be telepathic" nonsense.

You put him in costume.You gave him a "Contextualizing City", a kid sidekick, a unique responsibility that no one else could shoulder, a mystery to solve, a renewed Rogue's Gallery. All the kind of stuff I go on ENDLESSLY about on the blog; you actually DID it.

You (and the editors who permitted you to do it) are entirely responsisble for restoring Aquaman to glory, and if you wrote nothing but absolute doo-doo for the rest of your life, I would still praise you for that forever.

Besides, you made the Eel. I love the Eel.

Sorry, I got distracted by the huge, sparkly rack on the Riddler's moll there... you were saying?

Kidding (mostly). Honestly, though, I'm loving this Johnsification series, Scipio, and this entry was definitely my favorite - anything that brings the Riddler back out of the basement they tried to bury him in is a-okay in my book.

A bit late to the party, I know, but I finally thought of one: Professor Wye (pronounced "Why"), the psychiatrist for supervillains. If she can boost the Rainbow Raider's self-esteem, as she did in a "Brave & Bold" story, she can do pretty much anything! Too bad she's dead now. Or is she...? [cue fiendish cackle]

Where the heck are you getting these crazy custom clix?

In fact, Shirley, I've been considering ordering a Dr. Domino custom, but I'm afraid that, if I do, they wouldn't let me take it with me ...

Tell me more about this Prof. Wye; I can't find anything about her on the web.

She could be customized from a DEO Agent, and the dial would be perfect.

That's right, and currently up for view are five members of the dynamic Defenders, Marvel's non-team of the 70s and 80s, whom WK has chosen to overlook. And coming soon: THE METAL MEN!!