Yeesh, how stupid are they! Any idiot who reads comic books knows how to do that: 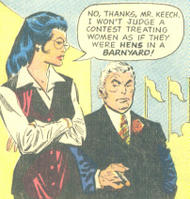 re Diana Prince.
Just look at what she could do for them -- on her first day!

<-- Publically condemn a U.N. sponsored contest to celebrate the beauty, grace, and unity

of women worldwide. The U.N. should be hold contests judging women on the basis of their abilities for violent conflict, warmaking, and personal combat, just like the contest that chose Wonder Woman.

--> Throw herself at the first handsome diplomat who comes along, despite his obvious horror.

<-- Cry in a public place when her tawdry advances are rebuffed. By the way, Diana, when even blind men call you ugly, perhaps it is time to consider a make-over, dear.

sessions with overdressed Inuits (in a public place, of course). There's actually a young boy there below the frame, becoming a man; I had to crop it out because posting that sort of stuff on the internet will get you arrested, you know.

Sorry, gang; the internet censors won't let me show you any more of the scene than this! 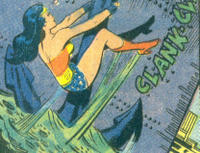 
into a woman's tools for enjoying peace. -->

That's in public, in case you hadn't guessed

Diana really does seem to like chains and stuff, doesn't she? I wonder what that's all about... .

Naturally, she'd finish up with a big floor show, where she could-- 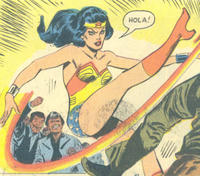 <-- Make out with tribal performance artists and do a big dance number. I swear, I just don't know how she does it! I even hear that -- still on her first day -- she also rode bronco on a nuclear missile and used it to blow up a supervillain and his battleship in the nearby harbor! On her lunch hour.

Well, folks -- they don't call her Wonder Woman for nothing!
Posted by Scipio at 5:31 PM

Has this all got much more surreal in my absence, or wot?

So you are saying this would be a better UN representative then John Bolton.

I show you some melting clocks in later post, I guarantee...

Besides, don't blame me; I don't WRITE the comics, I just read 'em!

As for Bolton, he can probably duplicate most of Wonder Woman's job skills.

Except the Amazonian "anchors-and-panties" trick....

And hey, she's even bilingual! Note the last frame. "Hola!" Much better than the current crop of US officials.

PS: Was it Doc Domino's battleship?

The drunken muttering Diana Prince, drowning her sorrows (in public) in a local bar. Translates to "I gotta have a..." What? What do you need, Diana? Tell us, please!

Actually, Brian, I skipped the part where she's in the background chatting it up with some headdress-wearing Indians from central casting, and her sexist pig boss explains to Morgan Tracy, troubleshooter diplomat, that he only hired her such a "plain Jane" to work among "all our beautiful girls here" because she spoke every Native American language fluently.

And NO I am not making that up.

For those not in the know (as I'm sure Brian is!), "hola" is an Ancient Greek word, the rough equivalent of a rural "yee-ha".