Starman Did Everything First 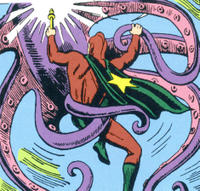 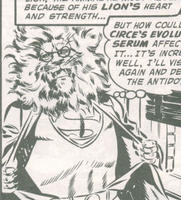 You think Superman invented the nifty trick of turning his head into a lion's?

You think Batman invented the "Macgyvering your way out of a deathtrap" routine?

I'm telling you, folks: Golden Age Starman is all the comic book you'll every need. Everything else is just a pale imitation....

Awesome! I can't wait to see the reprinted panels of...

...Golden Age Starman at the malt shop with his pal with an eating disorder, archrival, and two girls he can't decide between.

...Golden Age Starman in post-apocalyptic Japan, a rebel posessed by a spirit of destruction worshipped as a messiah by some.

...Golden Age Starman and his baby sister having wacky adventures in a world of adults, speaking in a language only they can understand.

And you'd be amazed how many of those situations can be handled easily with some old-fashioned muscle and a blast of cosmic energy!!!

Jerry was never the same afterwards...

I wonder if you've read the 1982 JLA/JSA team-up? That monster stretched over five issues, JLA #207-209 and All-Star Squadron #14-15. In one of those issues, I can't recall which, they did the classic multi-hero plot device of the teams splitting up into smaller teams, and Starman and Aquaman teamed up for action! Sounds like your meat and drink.

Ted Knight was Starman
But that was before he met
Mary Tyler Moore.

Ted Knight was also the narrator of the Aquaman cartoons, and the voice of most of the villains!

The last panels excerpted remind me of something modern comics have lost:

The story begins in the fifties on Earth-2. Earth-2 Batman is put in a deathtrap and escapes by improvising explosives. The villain goes comatose. Decades later, his consciousness possesses his law-abiding Earth-1 equivalent. The villain sets up another deathtrap and puts the Earth-1 Batman in it, this time removing the elements that allowed Earth-2 Batman to escape.