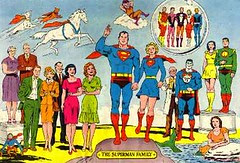 I started this weblog to air my idea about the "Dynastic Centerpiece" model that DC uses (consciously or not) to help turn its characters into icons. But nobody was reading it back then! So now I'd like to take a minute to bring that idea back to the forefront.

DC is re-applying what I'll call the "Dynastic Centerpiece" model to its icons. In the Dynastic Centerpiece model, a hero is not a single character but the centerpiece of his/her own array of good forces. Using basic concepts (such the Kid Sidekick, the Junior Counterpart, the Black Sheep, the Elder Statesman, the Female Counterpart, the Animal Companion, the Romantic Interest, the Civilian Companion, the Authority Figure, etc.) a constellation of characters is clustered around the central figure, which helps make him/her seem even more important.

Against them is arrayed an "anti-dynasty" of villains similarly created according to familiar archtypes (The Arch Enemy, The Lunatic, the Heroworshipping Villain, the Civilian Enemy, the Untouchable Crime Lord, the Magician, the Evil Opposite, the Femme Fatale, the Mental Challenger, The Physical Challenger, etc).

"Loner characters" not tied in with others are attractive and may have many interesting stories in them. But, because connectivity creates relevance, such characters usually don't feel important. If you eliminate them, nothing happens. If you eliminate a character richly connected with others, their world falls apart, particularly if that character is the centerpiece around which the others revolve. So by making a character a "dynastic centerpiece" and allowing a mythos to accrete around it, DC makes its character seem more important to us. Likewise, because DC head honcho Dan Didio (wisely) wants to re-establish Superman, Batman, and Wonder Woman as DC's most important characters, he is remaking the DCU so that its other characters revolve around them.

Each characters dynasty is not a cookie cutter of the others. The model is flexible enough to allow variety and individuality; Black Canary doesn't need a Snoopy Reporter Girlfriend and the Flash doesn't need Zipper the Flashhound. But there are definitely a number of recognizable, broad archtypes that are common in the model, because they flow naturally from the human psyche. Laugh if you want at things like "kid sidekicks", but our innate drive to mythologize a popular character by "filling out the pattern" is pretty strong.

The Golden Age sowed the seeds of the Dynastic Centerpiece (DC) model. It pioneered archtypes like the Girlfriend Who Doesn't Know, the Kid Sidekick, the Funny Friend, and the Civilian Authority. But the DC model came into its own in the Silver Age.

During the Silver Age, the Dynastic Centerpiece model was used to build a mythos around all the characters, as a matter of course. Done right, it can give the character the unstoppable momentum of a freight train. Superman is the most extreme example (for good and for ill), with some of his supporting characters even becoming the centers of their own little dynasties (specifically, Jimmy Olsen, Lois Lane, Krypto, and the Legion). Overdone or done poorly, the DC model can break down under its own weight like an overburdened wagon (we call this the Beppo Syndrome, and it gave the dubious benefits of Element Girl, Vicki Vale, and Zook).

Granted, you may not always like how such a pattern's being use. But, like it or not, characters who lack the pattern have trouble standing on their own. It's no coincidence that the likes of the Atom, Plastic Man, Martian Manhunter, Firestorm, Black Canary, despite their powers and pedigrees, don't carry the weight of icons like Superman or Batman, or that one of the main things that the revivals of Starman and Green Arrow did was to use pre-existing and new characters to "fill out" the pattern as much and as quickly as possible to build a dynasty around their stars.

One of the reasons that the JLA has such mythic power is that we feel it as the gathering of icons each of whom is the centerpiece of its own whole mythos, not just a gathering of individuals (like, say, the Avengers is). During the revitalization of the JSA, the writers/editors have played on this phenomenon by strengthening the ties of each member to larger mythos of which he/she is a part.

So together let's play the Dynastic Centerpiece game! In past posts, linked below, I chatted about the dynasties that exist (or could) around some heroes. What do you think about them? And, if you'd like, let's talk about what other heroes might have beneficial dynasties build around them.

I've run superhero role-playing games off and on for years. None of those games ever laid out the supporting cast as well as you just did now. Grrrrrr. They should get, I don't know, comic book fans to write those games.

Good points about the Dynastic Centerpiece model. I also read your Green Lantern post because I am a big fan of the "part of a much larger whole" brand of dynastic writing.

I won't keep up with the Green Lantern comic unless they have lots of appearances by the Corps and the Guardians, etc. It looks like they're going in that direction but if there's going to be a separate Corps book that's where my money's going.

The reason for this is that I generally prefer settings where you have copious tools for telling any kind of story and the metric tonne of GLC members fits that bill.

Of course, it can lead to something of an overload but when done well it gives writers freedom to bring in all kinds of interesting stuff. Like the F-Sharp Bell and the Living Planet.

You have inspired me to continue this discussion with a post on my own blog. I'll work up my thougts about the GLC in a more organized fashion now that I have the dynastic angle to work with.

Thanks, Shon. By training, I'm a Classicist. One of things we're taught is called "mythostructural analysis", and I simply applied that idea to comic books.

And, yes, I figured the idea of a Snooper Reporter Girlfriend for Black Canary would spark some interest...!

Thanks, Adrian, I'd forgotten him!

I love the Dynastic Centerpiece model as part of an ex post facto roadmap for improving the iconography of certain characters, but I’m unconvinced that DC purposely used some loose variation of this to “build the mythos” around all - or any - of its characters. So much of what arose out of the Silver Age, at least in this regard, was a byproduct of crippled creativity rather than conscious decisions to build up a character’s mythos. It seems pretty obvious that for any character to rise above the noise level they need a strong supporting cast and within that certain archetypes are unavoidable, but DC’s modus operandi seemed to be that anything met with mild acceptance (or no risible objection) was fodder for duplication ad nauseum. I would think the Dynastic Centerpiece model would be perfect for not only identifying what’s needed but also avoiding the rampant copycat silliness of DC in the 60’s.

I’d add two more thoughts to this: 1) The Centerpiece needs to have an identifiable profession (even if it’s simple “millionaire playboy”) to serve as an anchor for their alter ego (and the alter ego itself would seem a necessity). 2) I wonder if a more expansive application of the Dynastic Centerpiece wouldn’t lead to more continuity issues over a long period of time. Particularly the “Generation Gap” type of problems you discuss in your post below.

The knights of Charlemagne tended to have multigenerational family epics built around them. There'd be the original Charlemagne epic story (often featuring some actual historical person about whom little was known but lots told). Then there'd be the knight's own solo romance, which usually got him a lady (imprisoned princess, villain's beautiful daughter, or mistreated wife of villain); then he killed the villain and made the lady and her city/castle his own.

So then of course there had to be sequels (other adventures, marital misunderstandings, villains stealing lady, what the kids and grandkids and greatgrandkids got up to) and prequels (what the hero was like as a rebellious kid, what the parents and grandparents were like). The Provencal hero and saint William of Orange is probably the best example of this pattern. (He retired to a monastery, which according to legend was pretty amusing.)

But the hero also had to have a heroic death story, or at least a saintly one. Since people actually liked to travel to the gravesites of Carolingian noblemen who had chansons de geste written about them, having a good death was important. (You could almost say it was vital to the merchandising.)

You did in fact almost always know the names of the hero's weapons, shield, horse/s, dog, girlfriends/doomed love interests, wife, sworn swordbrother, squire/s, and pretty much his whole family tree. Also his lands and castles.

I realize the Matter of Britain gets all the press. (Which is only right, seeing as it was the Marvel Comics of its day.) But I honestly think that the Matter of France has a lot to offer for its parallels to DC superheroes. :)

Dear Scipio,
I just put a article on your DC model on my blog. Hope you won't mind, I have a link to this article in it...