Civic City; the Theft of the Crime-free City! 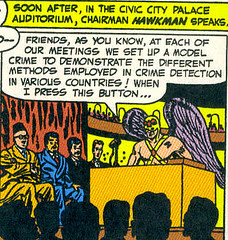 Who stole it? The Japs? The Ratzis? The Vandal Savage? Per Degaton?

Call out the Justice Society!

Yes, Civic City, home of the Justice Society for almost the entire run of All-Star, disappeared decades ago, wiped away with the rest of "Earth-2".

In Kupperberg's Atlas of the DCU (published as an adjunct to MayFair's DC roleplaying game), Civic City was located in Pennsylvania, a fairly sensible choice based on the assumption that it was a Philadelphia-analog.

Civic City was no little hamlet; it had its own international airport and an enormous convention center called the Palace.

Most JSA stories started in Civic City, but seldom stayed there. Of necessity, the JSA were globetrotters. The plot of JSA cases almost always forced the members to split up, each taking his own tack that required him to go to some other city, country, or (occasionally) planet.

Since the JSA was usually on walkabout, you got the impression there wasn't a lot of crime or supervillains in Civic City itself. That makes sense. Would you want to commit a crime anywhere within two miles of the JSA HQ?

Because most of their work was done elsewhere, the JSA's home of Civic City didn't develop much character of its own. But if you wanted low insurance rates, you lived in Civic City, where crime was so minimal that the only major resident villain was a linotyper.

So, who stole Civic City? Was it vibrated into another plane, like the Fiddler, the Thinker, and the Shade did to Keystone? Stuff like that used to happen all the time, you know.

Actually, the "Stolen City" is a case without a crime. We now know (thanks to Geoff "the Monitor" Johns) that Civic City did NOT disappear. In the short-lived "Stars and STRIPE", we got proof of its existence on the post-Crisis Earth: Pat Dugan's son goes to the Civic City Military Academy.

But the JSA's moved to New York where, frankly, they work well. If there's going to be a NYC in the DCU (although I'd prefer there wasn't), then there's got to be a reason that no big hero makes his home there. Having the JSA there explains that quite nicely, as well as the absence of lots of super-crime in the Big Apple.

That still leaves us with Civic City, a metropolis in Pennsylvania that used to be crime-free back in the day, but has no heroes now. Surely villainly must have taken a hold there and it needs a protector of its own!

C'mon, DC! Put someone, or even a group of heroes, in Civic City and bring one of your oldest fictionopolises back into the limelight.

Readers; who would YOU put in Civic City to fight modern day crime?
Posted by Scipio at 3:26 AM

Maybe the Ray can pull double-duty.

The Ray; where does the Ray live?

Maybe there should be a "Civic City" default;

unless DC says you live somewhere else, then you live in Civic City.

Uncle Sam, the Human Bomb, and those guys.

The Ray (at least, the modern age Ray) lives and operates out of Philadelphia. I'm thinking it should be childs' play for him to handle crime in both locations.

Dude: I'm sorry if my post offended. I really was just makin' a joke. :)

S'okay, Tim! I just did want to confuse the masses...

not that "masses" of people read the Absorbascon!

Didn't the JSA keep an office in Gotham City?

yes I am moonlighting from the Treadmill....