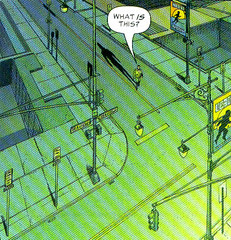 Coast City
Originally uploaded by Scipio1.
What is it? Why, it's Coast City, of course, one of the DCU's fabulous fictionopolises. This empty shell doesn't really do it justice; you should have seen it when it was an enormous smoking crater!

The fictionopolis is one of the DCU's greatest tools. Although most of them have their origins in the Golden and Silver Ages, they were fairly indistinguishable from one another at the time (much like the heroes who made them home). In the Golden and Silver Ages, there was really no way to tell Gotham from Metropolis, unless there was someone you knew in the frame. Well... if it was dark out or there was a giant prop, you were probably in Gotham.

But as heroes in the post-Crisis DCU began to differ not just in powers, but in tone, philosophy, and personality, so did their cities.

First Gotham and Metropolis began to individualize themselves in ways complementary to their native heroes. Then when James Robinson invented Opal City to contextualize Starman, the phenomenon exploded. Nowadays, it is just as important to have a unique city to stage a hero's adventures in as it used to be to have a kid sidekick.

Coast City is a case in point. Even though it had been COMPLETELY BLASTED from the face of the planet, Geoff Johns found a way to bring it back to give Hal Jordan a fictionopolis of his own. So, too, Johns returned the Flash to a reconceived Keystone and invented St. Roch for Hawkman. A hero without his or her own city is just a player in someone else's story.

This why a "Contextualizing City" is part of our Dynastic Centerpiece model for building a mythos around a hero. Such cities must be fictionopolises; once you set a fictional superhero in a real city, it contradicts them instead of contextualizing them, and they're doomed. Poor Kyle Rayner is one such victim. It's also one of the things that has hampered Wonder Woman (Byrne's attempts with "Gateway City" did not succeed).

Fortunately, there are some pre-existing cities still lying aroung in the Limbo section of the DCU Atlas, and in future posts we'll dust some of them off and advocate their return!
Posted by Scipio at 6:35 PM

Fictionalized cities also handily separates all your heroes so they can all live in their own version of New York or LA without having to justify why they don't all respond to the same super-villain threats. I followed Firestorm as a kid and it never made sense that he never ran into the Titans whenever a major chrisis hit New York. I've been re-reading my Marvel stuff (never had much) and it seems half the population of Marvel New York in the 80's was either a super-hero or super-villain. I think it devalues your hero when your own city really won't miss you if you dissappear. The hero 2 blocks down will pick up the slack.

I went with Opal City in a decision that wasn't as tough as I thought it would be. Too many of the other choices seem heavy on the civilian casualty risk. Plus, Opal has that whole hip James Robinson thing going for it.

I love these "think pieces" you do -- they are excellent. One day, when you finish discussing all the ingredients, you should do a grid of everything a superhero needs to create a Dynasty and how those without fail.

Opal's my favourite as well. It wasn't even a question. Robinson put in a lot of work to develop the city's upperworld and underworld - I like the idea of all those tunnels running around street level and down, and the more bits we got, the more I liked it. He actually set up a really solid method of doing it, as well; he brought in the Shade, and made him love the Opal more than anything - and then, using Shade as one of his POV characters, got to richly fill in the city more and more.

Then he had to add in more depth: Hamilton Drew and all the assorted time-lost victims of the Poster Demon just wandering the city, despite being centuries out of date in some cases...

For a long time, the Marvel U's geographic veritie was a touted as an edge over DC's fictional cities - as though superhero adventures are more 'real' if they take place in an actual locale.

Marvel's strategy backfired on several levels (some of which other folks have mentioned above).

Worst of all, when 9/11 happened and Marvel wanted to get serious about it, their tributes were undercut by the fact that they had been routinely devasting downtown Manhattan once a week for the previous 40 years.

Well....damn. I never really thought about it that way.

BTW, I wanted to vote for Opal City but after finding out Opal is modeled on Baltimore, as a lifelong Washingtonian, I just couldn't bring myself to do it.

"... devasting downtown Manhattan once a week for the previous 40 years."

But remember that great 4-issue limited series they got out of that, DAMAGE CONTROL, which was all about the insurers-cum-construction company heroes and villains could retain to clean up after them?

I agree with e, what's with not mentioning Aztek's groovy hometown?

Ron; it's not about the rubble, it's about the corpses.

Anonymous; it's one of the Forgotten Fictionopolis that's coming.

Well, there is that, yes.

Actually, I was so over Marvel by 2001 that when what happened happened, my few comics-related thoughts were mainly about how DC was going to wind up with even worse backlash than when that JFK/Superman teamup went out in November '63, since the Joker was in the midst of that kill-crazy rampage then what involved blowing huge chunks out of the Capitol dome and shooting up the White House.

How about the two or six alien invasions that blew the shit out of the earth?

Sept 11 shouldn't mean much in the DCU regardless of the Joker. Although the Joker and/or Mr Zsaz alone make John Lee Malvo or whatever real world serial killer look like a habitual jay-walker.