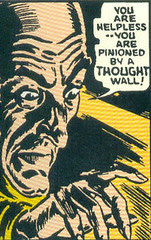 But there is NO CONTEST for the superhero with the most dramatic villains.

Not just the villains, but everything about the original Starman was DIRE CINEMATIC DRAMA. It was more pulp-like than other comics; creator Jack Burnley's art looked more like an EC horror story than standard superhero drawings of the day. And people spoke loudly; LOUDLY, I SAY!!!!

Read a mere synopsis of any Starman story and you'll have to stifle a yawn, maybe two. Read one with the art(in the proper Golden Age mindset) and you too will be gasping out things like, "NOT... THE PAPERCLIP OF PERVERSITY -- EEEEKKK!!!!"

This photo is a good example. That's "Dr. Doog", who is clearly evil because he's bald, heavily inked, and wearing a yellow bathrobe. Sure, sure ... nowadays villains do lots of mean stuff. But when's the last time you heard one of them say something like,

"You are helpless...you are pinioned by a thought wall!"

Now, THAT is villainous prose, people!
Posted by Scipio at 8:57 PM

Man, that guy actually looks kind-of imposing... compared to half the folks that are supposed to be scary villains these days, the idea of a sinister old man with mind-powers is actually refreshing.

Not to mention the classic 'callsign of evil' --- backwards spelling of the word "Good" !