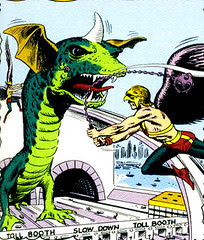 Midway City
Originally uploaded by Scipio1.
Pay no attention to the monster in the picture, or the characteristically brave Thanagarians risking their lives to prevent it from hurting earthlings.

Focus on the city in the background. That's glorious Midway City!

Clearly, it's a major American city in the DCU. It has its own police commissioner and District Attorney. It's got a righteously butt-kicking museum oozing with jewels, art, historical artifacts, and not a few alien or occult gee-gaws.

In fact, not only did the Thanagarian Hawkman and Hawkgirl heroize there, so did the outre Doom Patrol, HQing in their creepy old mansion smackdab in the middle of downtown. As far as I know, Midway was big enough that they never ran into each other! [Please correct me if that's wrong.]

It's been repeatedly assumed that Midway is in Michigan. We do know that within a half-day Hawkman-flight north of the city, it can snow a great deal ("Rivalry of the Winged Wonders", Hawkman No. 1), so it sure ain't in Florida.

Two sets of heroes made their home in a major metropolitan area which we know (thanks to JLA Year One) still exists in the DCU.

DC! Please tune us in to Midway City! Who lives there now?

Maybe the Martian Manhunter? Why not. He's been crippled too long by the impractically silly idea that he lives all about the world, improbably maintaining scores of little lives. The man can't (musn't!) live in the Watchtower, for H'ronmeer's sake...

Any other ideas, folks?
Posted by Scipio at 6:55 PM

You know, I actually like the idea of J'onn maintaining several secret identities, but maybe not ALL over the world...although I'm loathe to wonder how he managed to coordinate all of those little lives.

If I remember correctly, Davis's "The Nail" had J'onn in Star City, but of course that's just an Elseworld...

He used to live originally in Middleton, Colorado (pre-Crisis) then was portrayed as living in Denver (post-Crisis). But there's been almost no evidence of that post-JLI, and with the DEO exposing most of his identities I've been assuming his life in Denver is gone (absent any evidence to the contrary).

Actually, I just want them to bring Middelton back...

I like the idea of J'Onn maintaining multiple identities in his past, when he was just finding out about human experiences. It's an impractical idea for the present, however.

Sure, give J'Onn Midway City. If it's like Chicago or detroit, that gives him ample options for different stories.