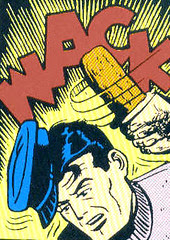 wack
Originally uploaded by Scipio1.
Bruce Wayne's head is as tasty a target as Batman's, it seems.

"Hmm," thought the thug, "there's a familiar wack to this guy's skull. Could it be that Bruce Wayne is Batman...?"


Is that the look that's always being hidden by the white slits on the cowl when Batman gets klonked? It's priceless! It says, "but...but... I'm Batman! Help me, Grant Morrison!"
Posted by Scipio at 11:30 AM

Was he hit by a breadstick or an oddly-colored Fallus?