It's not enough, you know, that the Martian Manhunter is a shape-shifting mentalist with superstrength, superspeed, superhearing, x-ray vision, heat vision, microscopic vision, and the ability to become invisible or intangible.

Not nearly enough. J'onn's greedy, you see; he wants powers you've never heard of, powers that only frumpy middle-aged Manhattanite sci-fi geeks in the 1950s could imagine, and so many of them that he can use them once, then discard and forget about them, like disposable towelettes.


He can draw gold from seawater with his mind. 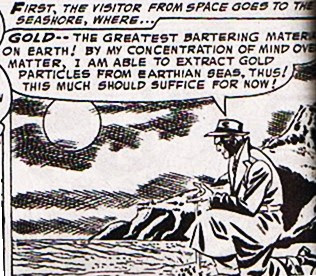 "Earthian"? You're so weird, J'onn...
Okay, I'm sorry; I know everyone's already seen this panel. It's from the Origin of the Martian Manhunter. But what better way to start Martian Manhunter Week than with this perfect example of his absurdity? But that's nothing...


He can create ice cream cones out of thin air by summoning powers from the void. 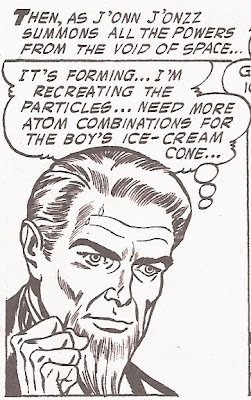 Didn't believe me, did you?
Next time someone at your neighborhood comic book store is talking about how dumb Jonn'z weakness to fire is, pipe up knowingly with, "Sh'yeah, I mean, why doesn't he just recreate the atom combinations of a giant ice cream cone using the powers from the void of space and use it to smother the flames?" That'll shut everyone up, and all the girls will drop their copies of Local and run over to hang on you admiringly. Works every time.

J'onn can make your clothes wash and iron themselves through substitutiary locomotion. 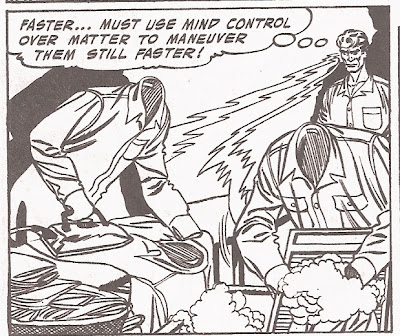 Treguna, mecoides, tricorum, satis dee!
They aren't exactly proud of it, but everywhere other than Earth, Martians aren't manhunters; they're launderers. Yes, everywhere from Rann to Rimbor, there are little mom & pop Martian laundries, as well as Martian take-out places famous for their "Summoned From the Void"-flavored ice cream, whose owners go home nightly to Martiantown on the edge of the city. Once a year, tourists visit during Martian New Year to enjoy the parade of water-breathing dragons and watercrackers. And speaking of water-breathing...

He can breathe underwater. 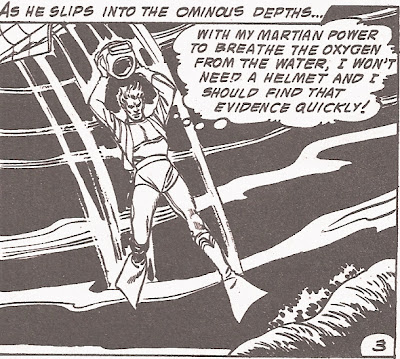 Must remember that for my Aquaman-themed Heroclix games on the water maps.
Really, J'onn; would it kill you to put the helmet on, in case someone sees you? Show-off. Actually, he's probably just being greedy: "As long as I'm down here, I'll fill my helmet with gold dust I extract from the seawater with my mind, then make up some lame, last-minute explanation for it when I surface to rejoin my colleagues!"


He can magnetize metal through sheer concentration. 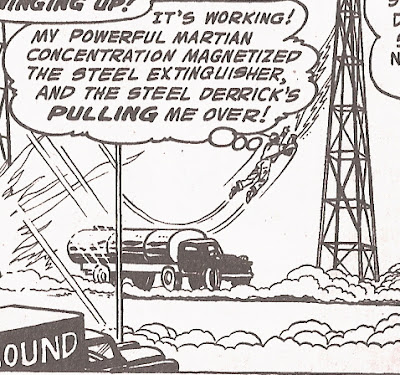 He can grow to gigantic proportions (furthering my Tony Robbins Theory, I might add). 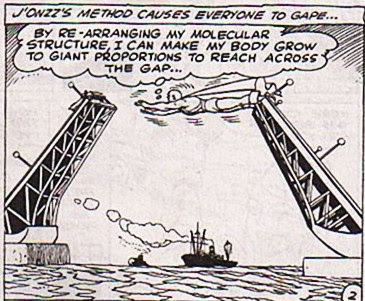 I'm sparing you the next panel, which shows a car driving over his butt.
Now, that is a power so useful and impressive in battle, that he surely will use it again and again. What, never? Well, hardly ever. Wizkids, please remember to make a giant Martian Manhunter figure, or at least give him 'Enbiggen' as a special power. Oh, and, conversely...


He can shrink to mini-mate proportions. 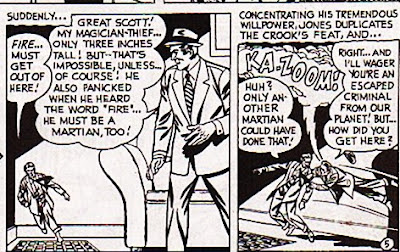 If I had to choose a sound effect for shrinking, it wouldn't be "Ka-zoom". Maybe the wizard Shazam gave him the power?
Naturally. As if the god-like Martian Manhunter wouldn't covet the power of people like Bumblebee and Doll Man.

There are more powers; many more, including such lulus as the ability to scare sharks with his appearance, "atom vision", and "around-the-corner vision" (because x-ray vision is not enough, never enough). But, honestly, I don't have the strength to scan them all. So, before I leave you either to ponder what they are or to simply go buy the Martian Manhunter Showcase, I give you one final power...


He can violate the Fourth Wall at will. 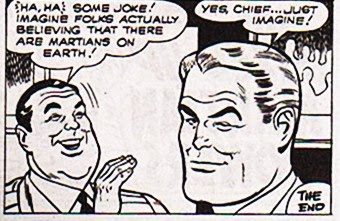 "I'll use my power of Martian-winking to seek aid!
Kids, clap if you believe in Martians!"

P.S. Remember when I said I would spare you?

Email ThisBlogThis!Share to TwitterShare to FacebookShare to Pinterest
Labels: Martian Manhunter, Why we hate Adam Strange and the Dirty Stinking Rannies

He can magnetize metal through sheer concentration.

I can do that.

Oh, man. Hilarious, my friend. No wonder they couldn't write for this guy. He had a different power every story.

I remember an issue of JLA where J'onn fought Despero, and he had some weird mind beam that every Martian can only use once in their lives. Maybe all of these powers work that way. Martians can become giants once, they can shrink once, they can make ice cream out of the void once, etc., etc.

Actually, "kazoom" is the word Zatanna uses to summon elevator music to tranquilize her opponents.

Martians must have some sort of internal Hero-Dial that generates random powers for them.

Maybe someone should create a new series called "Dial M for Martian" starring Rob'ee R'eed as the protagonist.

I cannot believe you made a "Bedknobs and Broomsticks" reference. What's next, Aquaman singing verses of "The Beautiful Briny?"

Unfortunately, I can only use my Martian power of Cinematic Reference once for any film.

I was prepared to be very sad when you said you wouldn't show a car driving over J'onn's butt. That last panel was like when you open that one last Christmas present and it turns out to be the one thing you really wanted.

Won't the Chief be suspicious when he sees tire tracks on Detective Jones' Buttt?

As a verdophile from way back, I'm quite happy to know that J'onn can grow to gargantuan proportions.

Unfortunately, like all big guys, he just lies face down and wants you to drive over his butt.

"Kazoom is the word Zatanna uses..."

Goateed J'onn needs to quit manufacturing ice cream cones with his mind and get back to fronting his retro-punkabilly band, STAT.

That last panel would be utterly perfect if Clueless Hanger-On on the left were thinking, "Too bad Detective Jones isn't here to see this. Hmmm... I wonder what he's doing at this moment?"

But...he is. At least I'm seeing him say that in the panel I'm looking at.

It appears that Superman stole that bridge gag for his first movie.

Call me silly, but I can only assume that J'onn had some kinks in his martian back, and getting a car with giant fins to drive over it, was the only way to bring him relief.

Twenty four hours later, and still the shot of the car driving over J'onn's butt makes me smile whenever I see it. Yet another inexplicable Martian power!

You know, perhaps yesterday I was just too awestruck to really think about this panel. Couldn't J'onn just fly the car across? Why did the car need to get across so bad anyway? And how will the car get over his heel to drive down the rest of his foot?

I'll have to agree with Sallyp, he wasn't saving the car, he just needed a nice back massage!

"Unfortunately, like all big guys, he just lies face down and wants you to drive over his butt."

(Bugs Bunny Voice) Aint it the truth though?

I just realized something. J'Onn J'Onzz was a Martian who had science-based powers that he could utilize in a variety of imaginative ways.

Might he have been the inspiration for a short-lived but popular television show that debuted a few years later?

"Manhunter! We need your help! The Earth is being invaded by monstrous creatures from Enysxyuz! And since this is still the time before in-universe crossovers were invented, you're the only one who can stop them!"

"Sorry, a couple of teenagers in a Buick convertible are parked on my ass! They must think I'm Makeout Point or something. Sorry, I can't help you!"