Blues Skies for the Martian Manhunter

So, this week at Heroclix, in honor of Martian Manhunter Week, I fielded a team composed of nothing but Martian Manhunters (the 167 pt. Experienced one, the 114 pt Rookie one, the 177 pt Unique, and the 144 pt. Detective John Jones). Between them, they had a vast array of powers, making them an unstoppable force.

Naturally, I lost. In fact, I got my butt whooped (or perhaps I should say, "driven over by a convertible"). A team of nothing but Martian Manhunters is pretty formidable, but against a team of Superman, Batman, Wonder Woman, and Green Lantern-- well, let's just say my "unstoppable force" was forced to stop pretty quickly.

That's okay. There will almost surely be a new Martian Manhunter clix in the new JLA set that comes out September 5. The new "special powers" mechanic will enable them finally to do JJ justice on a Heroclix dial. I will be very disappointed if "Creating Ice Cream Cones With Your Mind" and "Road Bump Butt" aren't among his special abilities.

Batman was definitely one of JJ's problems on the board (that, and Superman shoving a dumpster in his face at Mach 4). Batman, as always, stealthing in bush and outwitting J'onn myriad powers, just as I was about to form a barrier by drawing gold from seawater or alter the path of a baseball to bean Batman on the head. So, to welcome the new improved Martian Manhunter clix I'm expecting I created a map where Batman won't be a problem: 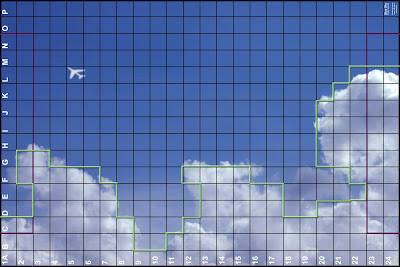 Flyers only on this map! And lots of clouds for JJ to stealth in, and nothing to catch fire.
The battle is in mid-air, so only flying characters are allowed. Note also that no objects are permitted to be used on this board (for obvious reasons). Also, like the murky areas in our last map, the cloudy Hindering Terrain affects only line of sight, not movement. And, yes, characters can still "soar" while on this map.

Word of advice: don't use any characters with "Earthbound" on their dials! If a character does turn up "Earthbound" in the course of the game, it will fall to earth and is removed from the board. UNLESS, that is, a teammate can fly over adjacent to them and "catch" them on the first move of your next turn... but, then, of course, they can't let go as long as the figure has Earthbound!
Posted by Scipio at 6:40 PM

And always remember: Batman can fly through sheer force of will.

And breathe in space.
This won't even BEGIN to stop him.

I love that map with an intensity approaching blasphemy.

The plane should be an object.

Ooh, make a heroclix side-view map. Characters can only go up if they fly!

House rule: If any player has Brainiac 5 on the board, you can play your Batman.

I'm pretty sure that with a veteran Mister Miracle and a few assorted Legionnaires I could probably destroy your 600 point MM team, but I wouldn't want to humiliate you on your own map.

Seriously, though, that map is fun in the way that it would highlight the powers of some of the more powerful flyers. That would also be a fun map to play all GL teams on.

Part of me thinks you made that map just so Green Arrow can never be played on it. It's not easy being Green... Arrow.

A team of nothing but Martian Manhunters is pretty formidable

Unless the other team has Human Torch, Magma, Sunfire, Firebrand, Green Flame, or even a reasonably clever Cub Scout with two sticks.

On the comics pages, a team of Martian Manhunters could beat Superman, WW, Bats and Green Lantern without even really trying. The mental attacks alone are formidable enough, then there's the intangibility, strength, vision ranged attack, and shape change... No contest.

Yet somehow, he's always weaker then them.

It makes no sense.

It does, actually. He's a utility player, not an MVP.