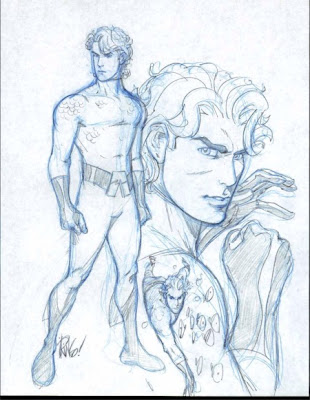 On the most recent Big Monkey Podcast, the gang and I mourned the loss of comic book artist Mike Wieringo, who was beloved both for who he was and the work he did. Remembrances by his colleagues (like Mark Waid here at Newsarama) have brought to my attention the pitch that Waid and Wieringo did for Aquaman four years ago, which I include in its entirety below.

It's nice-- very nice-- to see that there are people who get Aquaman. Sadly, DC's editors weren't, and apparently, still aren't among them.

How delightful, how different Aquaman's recent history would have been, had the Waid/Wieringo pitch been accepted. Aquaman would have been leading DC's charge toward brighter, more inspiring heroes, rather than trailing far behind.

Tad Williams would have this guy at right to work with, rather than having been given the superhuman task of writing Aquaman without Aquaman in it, of making bricks without straw. Tad has, in fact, done a superhuman job of pulling together the various pieces of Aquaman's broken history, adding new and interesting elements, and weaving them into a narrative quilt that's made DC's underwater world seem larger and more fascinating than ever before. For that, he gets my highest praise. But DC, in forbidding him to bring back the real Aquaman, has essentially doomed his ingenious series and might as well rename it Aquaman: Meatless Lasagna. 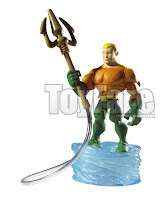 I take some comfort in knowing that the type of Aquaman described below will be coming back. DC's new Superfriends comic (and its concurrent toy line) will, of course, include the Classic version of Aquaman, because, although Editorial doesn't also know what sells, Marketing does. Surely DC won't let pass that opportunity to reassert Classic Aquaman in a manner similar to what Waid and Wieringo laid out below.

Why, that would be like wasting the unprecedented level of public recognition that JLU brought the Martian Manhunter by not having him in the JLA or by dramatically altering his visual and character design!

"I am so sick of people making fun of Aquaman that I’m beginning to take it personally. For the last ten years or so, the way we’ve been scrambling to combat Aquaman’s “Dork of the Sea” image--and I’ve been guilty of trying this, too--is by making Aquaman increasingly darker, grittier, and tougher, the brooding, angry king beset with trouble. Each incarnation of the character seems grimmer than the last, to the point where all that’s left for us to do is give him two hooks. And a peg-leg.

OR--here’s ANOTHER thought. Yes, the seas can be turbulent and stormy, but y’know what? Far more often, the ocean is a universal symbol for peace and contentment. It’s a calming influence. If it weren’t, Bermuda would be deserted and would be an industrial trade port. It is most people’s “happy place.” Yes, the ocean is the set piece for “A Perfect Storm,” but it’s also the world of “Finding Nemo” and “The Little Mermaid.” I have never yet met anyone of any age who didn’t come away from Sea World envying the guides who swim with the whales and porpoises. I propose we turn this “grim Aquaman” paradigm around for a one-shot and see what happens. “Test the waters,” if you will. I know, I slay me. Anyway....

Our POV character in this story is a female marine biologist--and since Aquaman’s turf covers the world, there’s no need to make her American. (In fact, Russian is preferable--I’ve been doing a lot of reading about the culture of Russian courtship, and that could really play in nicely.) At any rate, our biologist--let’s call her Yelena for now--may have heard the name “Aquaman” here and there, but to her, he’s about as real and significant as, say, German football stars are to you and me.

Yelena’s work is done with grungy old equipment and spit-and-bailing-wire technology, the best she has to work with. Her whole world has a gritty feel to it--

--so when this bright, blond, shining knight of a man pops out of the water and into her life, she’s addled simply by the contrast.

Their paths cross, she’s drawn into an adventure, and to Yelena, this “Aquaman” is, yes, mysterious like the sea--but in a warm, enticing way. To Yelena, he is otherworldly, like a fairy tale character come to life. He rarely speaks (though when he does, he’s staggeringly charming), he lives in the water, and he smiles. Constantly. In fact, at first, Yelena has a nearly impossible time taking him seriously. He’s like a walking cartoon.

And yet...the more she gets to know him, the further she’s drawn out of her world and into his, she’ll come to realize that there’s something going on behind those wide eyes of his. Looking in them, she sees peace and confidence; looking through them, she’s gradually introduced to an underwater world of absolute wonder, a place that is far more colorful and in tune with nature than is her own gritty lifestyle. Once she surrenders to the implausibility of it all, she’s rewarded a thousandfold, and so are we. Aquaman’s joy becomes her joy becomes OUR joy.

There will be no mocking. NO jokes about how “dumb” talking to fish is. Anyone with a keyboard can make cynical jokes. That’s easy. What’s harder is reminding you why, when you were a kid, you thought the idea of living underwater or commanding the creatures of the sea WAS cool. We can do that. We can remind you, and Yelena’s awed voice will be there to back us up."

And I say that as a fan of Busiek's run.

They could still do this sort of thing in a year or so.

I hope they do this sort of thing in a year or so.

That DOES sound like a nice proposal. In fact I'd buy it. Oh,and what a lovely rendition of Arthur by Mr. Wieringo!

A slightly more light-hearted approach would be a wonderful idea. I've about had it up to here with grim and gritty.

Yeah, as I said to you privately, Scip: this Aquaman is achingly and uncannily similar to the one that's always been in my head.

It's the character's essence, distilled into a handful of paragraphs and a few curving lines.

And, as I also said, with resepct to the fact that a stupid quirk of fate has rendered it impossible forever: fuckity fuck fuck fuck.

Well that's a tease. Aquaman may not be in Tad Williams' (outstanding) run of Aquaman, but no Aquaman is better than constipated angry Aquaman.

I've never been an Aquaman fan, per se, but that proposal is a great idea and an Aquaman comic I think I would enjoy! It's too bad DC didn't think so and let it happen.

Yeah, about the fish guy.

You've kept the fire burning for years, Scip, I've got your back.

Aquaman was my favorite when I was a kid. I had the MEGO doll and would put it back in the box at the end of every day for safe keeping (a harbinger if ever there was one). Anyway, he is the ruler of 70% of the planet. The fact that nobody knows what to do with him is a shame. And the fact that stoner post-adolescents still think "Aquaman's teh gay" is funny is truly disheartening.

Thanks, Banana Oil. Rescue orange? Nice call; I never thought it that way.

He's not about hiding from foes; he's about being visible to people in trouble.

I like that take on Aquaman (having enjoyed the recent Showcase TPB), but I'm not a big fan of stories in which a supporting character constantly tells us how great the main character is. Had this comic been published, there's a good chance I would have quickly grown tired of "Yelena's awed voice".

Rodrigo, I think that would only be the selling point for the one-shot. As a series, the "awed voice" would probably quiet down to a mere background mumble from time to time. I'm guessing, anyway.

Anyway, this is an excellent proposal. I wish they'd made it.

"He's not about hiding from foes; he's about being visible to people in trouble."

DC continues to ignore the most crucial difference between Aquaman and the Sub-Mariner.

(1) If DC can still sell Superman wearing his underwear outside his pants, I think selling a character with a strong mythological base (akin to Poseidon) should be a piece of cake. Only DC's editorial can screw up this badly...

(2) The idea that Aquaman might be the quiet type shows that this writer put a lot of thought into what's already present in the Aquaman character (instead of merely using Aquaman as a platform for wholly inappropriate ideas). It makes perfect sense that a man who spends so much time underwater communicating with telepathy might find using vocal chords a bit more clumsy.

(3) Does it take a brain surgeon to realize that the best way to withstand juvenile snarkiness is to ignore it? There's nothing un-cool about Aquaman. Just read Alex Ross's JUSTICE.

(4) How refreshing to see the introduction of a non-American character be conceived based on that character's traits--not just an editorial plan to "diversify." The purpose of Yelena being Russian is to explore her culture (and Aquaman's reactions to it).

Depth, that's the key word of this proposal. Aquaman would have had depth. No gimmicks, no replacements, violations of continuity. Just a desire to return Aquaman back to his deserved place in the DC heirarchy--an icon.

Y'know, I've never read an Aquaman comic and I certainly had no interest in Sword of Atlantis. I have traditionally been more Marvel-centric.

This? I would've bought it in a heartbeat.

I clicked on you link and loved it.

"Look at him. He's wearing orange. RESCUE orange. He knows what his job is."

"Look at him. He knows damn well what the world says when his back is turned. And he doesn't give a flying fish what YOU say. He has better sh** to do this morning. Guess how many giant evil sea monsters are down there. Guess."

My favorite comics blogs all "get" Aquaman.

I'd buy it. Sounds like a winner. If done with some intelligence, there's lots of material in the contrast of the world on the surface is completely different than the undersea world.

Re: "doesn't give a flying fish what you think."

It's old, and it's longer than it needs to be, but it's sort of funny and on point, in the Anti-Seanbaby sense:

DC's rejection of this proposal only proves the old adage: an editor is someone who separates the wheat from the chaff, and prints the chaff.

And hell yes to the idea of "rescue orange".

I had an idea for an Aquaman pitch a ways back.

Aquaman will never be cool. And ignoring what makes him uncool is always a bad idea. I would have turned down this proposal after reading "golden haired shining knight".

Why do the most slug-hearted comments always appear under the aegis of the greatest anonymity?