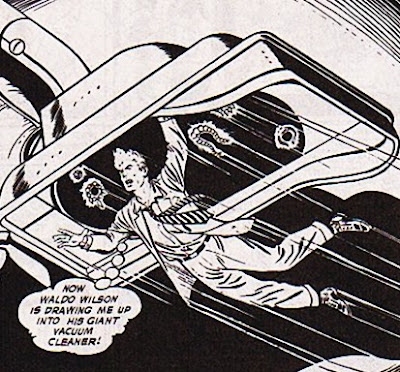 I believe he's one of the characters getting a Countdown mini in the coming months.

If that man doesn't belong in the Justice League, *no one* does...

The scary thing, is that this could probably happen at my house.

I'm waiting for a riding vacumn. With a cup holder.

I hate it when that happens.

Fortunately, Martians are capable of surviving...


Thank you,ladies and gentlemen, I'll be here all week!

That said though, that does look pretty awesome.

I can't help wondering, however, *why* would you actually think that?

This is going to be the greatest week ever. After all, there's no way this blog could do anything but paint the Martian Manhunter in a positive and heroic light.

I mean it's not going to just be an excuse to make a lot of sucking and blowing puns right?

After he gets the Martian Manhunter, does Waldo Wilson go after Zook with a giant DustBuster?