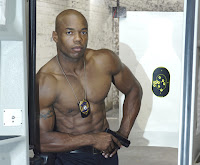 Now, that is comic book irony.
Posted by Scipio at 7:40 AM

See Scip? I read your blog. But I'm afraid that if you read a quote involving yourself (or your fictional alter-ego), the universe will turn inside out.

Only if he does the same thing, at the same time.

It's too bad the two of you don't work in Ivytown. Then Devon could work for Lady Cop!

No scan of this page??

I just saw the panel in question over at Seven Hells! Great job. Garling and Sanders - Metropolis PD. It's a buddy-cop comic just begging to be written.

The image of you and Devon as Sean and Gus from 'Psych' just gave me the unstoppable giggles. Very cool on both the shout-out and the pairing.

Wow. I always knew we were in the presence of greatness, but I didn't know that it was greatness which shared the page with Superman himself...

Man, what a cool honor! Now they just need to spin your characters off into their own book. Like "Dudes of Prey" or somethin'.

I wonder what the 51 other versions of Scipio and Devon are like. Now that would make a great weekly comic.

Some may be ape-like beings... or even women!

That is so awesome Scipio! Congrats.

Superman as the voice of calm normality in a crazy world of "B" science fiction films gone wild. -- Our Host

If they were women, would they be considered straight?

Can we look forward to a Brave and the Bold: Office Scip meets Vibe?

In Thunderbolts #2, Mr. Busiek wrote that the Thunderbolts (whose identity had not yet been revealed as the Masters of Evil) had captured the Circus of Crime in Newark, Delaware.

The proprietor of my LCS (Captain Blue Hen's in Newark, Delaware) claimed that Mr. Busiek was inspired to choose that locale by a personal appearance he had made recently at the store. I harbored some doubt about that, at the time. After reading this, I'm not so sure.

Scip, you have no idea how much I envy that first moment you saw your name(s).

Come on, don't I deserve a link for being the first to point your cameo out to you? I appreciate the name drop, but a link would be killer!
Jonathan