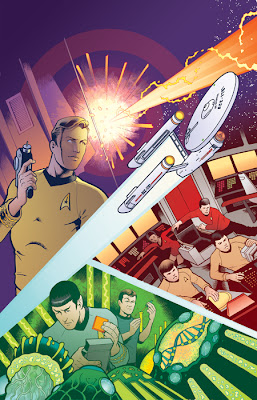 Give Star Trek: Year Four a try; I'll be interested to know what you think.
Posted by Scipio at 10:15 PM

I liked this book, a lot more than Star Trek TNG: The Space between, which had awful art, and a boring an non-sensical plot.

The art here, on the other hand, didn't dazzle me at all... I found the lack of detail lazy, not retro or stylized.

gives me hope for IDW's Doctor Who book coming out in a few months.

I liked it a lot too. I really dislike (but a considerable majority seems to *demand*) photorealism in licensed comics. Not inherently a bad idea, of course, but in practice, that usually looks awful to me, with an over-reliance on really obvious photo reference, with panels based on the reference material regardless of whether they fit the story or not.

Incidentally, speaking of reference material, did anybody notice the Previews ad for a new Jack Bauer action figure? The ad shows the figure in detail, with an accompanying picture of Kiefer Sutherland as Jack, in the same outfit... and the two look (to me, anyway) almost nothing alike! My first thought was, "Huh, so they're doing action figures of minor *24* characters now? Who's that guy? The bad guy who pretended to be a concerned father in Season One? Soul Patch, maybe?"

I think everything you said was spot on, but I have one soft criticism of the book. It felt disjointed and rushed. I felt like it was written to be told in two issues, or something. I'm not sure.

When red shirts die, you know it's accurate Star Trek.

I thought was entertaining enough, but nothing spectacular. It definitely didn't dissuade me from my belief that all Star Trek comics should be written by Peter David.

Don't get me wrong, I'm not asking for photorealism, I'm asking for detailed art where characters faces get draw in every panel, thank you.