I went to the beach yesterday.

I did all the normal things you do when you go to the beach. I swam in the ocean. I tried to activate my water-breathing genes. I attempted to communicate aquatelepathically. 'Cuz ya never know. What? Oh, like you never tried saying "Shazam!", just in case. Turns out, I wasn't able to summon fish, but while squunching my forehead trying to emanate concentric circles, I was able to summon a giant wave that nearly knocked me on my ass, which I suppose is a start.

I also discovered that if you fall asleep by yourself in the sun, without anyone to wake you, you get sunburnt. Badly sunburnt. I look like one of the female Legionnaires whom Satan Girl infected with the Crimson Virus. Except without, you know, the female parts. And, since my hair looks pretty much like Fire Lad's (particularly after a trip to the beach), I now look like one of the Heat Miser's backup singers. Except not that fat.

And the pain. Oh, as Dr. Smith would have said, the pain. Want to deepen your understanding of characters like the Joker or Two-Face, whose origin involves acid or falling into vats of chemical wastes? Get a sunburn. Suddenly, the way they lash out at the world seems a model of restraint.

So, in that kind of pain, I naturally had trouble sleeping last night (that, and the sleeping all afternoon at the beach and the large coffee I had to steel my nerves). Therefore, I did what any normal person would do, awake a night in teeth-clenching pain from photonic poisoning... 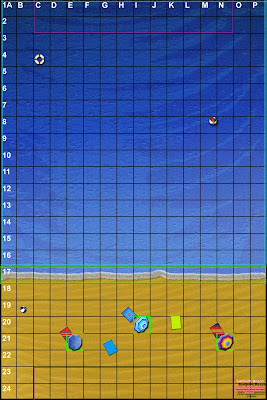 I made a Heroclix map about it.

It's pretty shallow water, though; flyers will still be able float out and base aquatic figures. They'll probably have to, because aquatic figures don't like to wander on land, where they have to deal with tedious hindrances like beach umbrellas. And everyone who's not a flyer or a leap/climber is going to have trouble right at the water's edge, which is all hindering terrain.

I hope you have more fun at Sunburn Beach than I did!
Posted by Scipio at 8:38 AM

Never met a sea creature, in the sea that I liked. I think if I had the power to talk to sea creatures, I'd just lead lobsters, shrimp, grouper, salmon, etc. close enough to me to capture and make into a nice dinner.

I'm a bit surprised you didn't try to form water balls. Even if you were unsuccessful, it might help inform why Aquaman does not currently form them.

you know, i can remember saying shazam just in case a lot. I think I tried it last week.

I think I'm going to have to have that one made.

Now that is turning adversity into...Victory! Way to go, Scipio.

I had a similar case of photon overload about twelve years ago. Due to my fish-belly pallor, I burn by merely thinking about the sun. Knowing this, I applied a thick coating of SPF 1,000,000 to my body before heading out into the hot Florida beach with a cluster of my friends.

Sadly, I applied it only to my front. Because I am a moron.

My front half retained my traditional corpse-white shade. My back half became candy-apple red. And right down my middle was a clean dividing line. No shading into pink, no delicate gradients of burnt flesh, no. The line between red and white flesh was solid. I looked like a demented harlequin.

I understand your sunburning pain, my pasty brother.

This is a nice article shared. This is really a different from others.

Really great post, Thank you for sharing This knowledge.Excellently written article, if only all bloggers offered the same level of content as you, the internet would be a much better place. Please keep it up!

Oh my god, there is really much worthwhile data in this post!
metal buildings

Wow, there is a lot of helpful information in this post!
dallas world aquarium | washington dc chiropractor | atlanta limousine service