I'm not just here to make fun of the Martian Manhunter this week (although, really, that would be purpose enough for a month's worth of posts). I'm here to help him. Sure, he may be crazy, ill-conceived, and dated; but he's classic, a pillar of the DCU, and full of potential. Unlike, say, Geo-Force.

If there's anything to learn from the examples of Batman & Superman (and the anti-examples of the Flash and Wonder Woman), it's that a solid and consistent supporting cast is conducive to popularity and longevity. In our modern multiversal world where heroes spend lots of time connecting with heroes in other titles, it's easy to forget that each major hero should have a "universe" of his or her own, a world of people and places that can sustain their stories indefinitely without requiring recourse to the outside world of the rest of the DCU. Any hero you can't do that for, simply isn't going to be a major hero.

I've chatted before about cobbling together a "dynasty" for Martian Manhunter, but that's a little different from a basic supporting cast. But a stroll through the MM Showcase edition gives us a number of characters who could be revived or reimagined as part of his supporting cast.

Nothing has ever made the Martian Manhunter a more human, more accessible, more sympathetic character to me than the fact that he adopted a dachshund. A dachshund who wears sweatshirts and is hecka strong. Named "Jupiter". Yeah, you can draw gold from seawater with your mind and phase through solid matter, but can you make a dachshund behave? No, I don't think so.

Unfortunately, despite John's promise that "we're going to real pals for a long time," Jupiter is never seen again in a Martian Manhunter story. 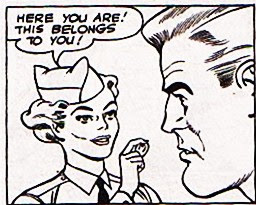 A "lady police officer"; what will they think of next? Diane Meade was smart as a whip; she figured out JJ was the Martian Manhunter after spending one day with him, and she didn't see him change or anything; she deduced it. You rock, Diane. Plus, you look positively darling in that jaunty little WAC-cap (which should definitely be part of the costume design for any Diane redux).

You know, not every women in comics needs to be a beer-swilling, butt-kicking, Asian lesbian ninja. It would be nice to see someone who fights crime with some gentility (kind of like the Martian Manhunter himself does). How can you not love a character who says things like "Good gracious! A parked truck exploded! Lucky no one was around!"? Bring back Diane, and let her be a detective rather than a street cop.

Diane probably shouldn't be a romantic interest. That should be saved for Lady Cop (Chief Liza Warner of the Ivy Town police department). That way John Jones could be involved in a tense love triangle with her and MetroPD's Officer Devon Sanders, a Loose Cannon Cop Who Doesn't Play By the Rules. 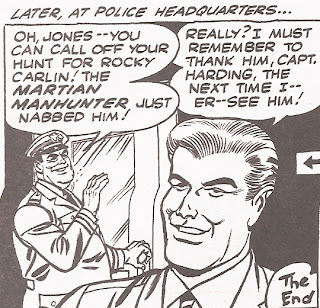 I like this guy. One, he wears a uniform, kind of like C. Everett Koop. Two, he almost never gets up from behind his desk (I got this rare photo capture from a disappointed Bigfoot aficionado). None of this Aging Action Hero crap for him. No Gordonesque "I was a beat cop once, and I still know how to use a gun, son!" nonsense for Cap't H. He worked hard to get where he is, and he ain't movin' now.

Third, he's got gravitas, the kind that comes from avoirdupois. You can tell when Cap'n H does make the effort to get out of that chair, it's to head straight for the cafeteria (twice on Porkchop Day).


Jim Wade, Editor of the Clarion

It's always helpful to have a reporter-type in your supporting cast because they can pop up pretty much whenever you need them, on the pretext of "following up on a lead". You can have, say, your dentist in your cast, but it strains credulity to have your dentist continually turning up at raging fires, hostage situations, and supervillain attacks (unless, of course, your dentist is Jaime Reyes). Supporting cast reporters are often focused on figuring out the hero's "secret identity", but I don't think anyone would assume a Martian would even have a secret identity. I'd rather seen him as a human buddy for John Jones, someone he could hang out with at the bar, having milk and Oreos together. 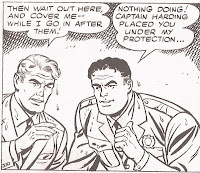 A big palooka on the police force of Whateversville, who's devoted to John Jones. He says it's just his job to protect him, but I think-- well, I think the Strongest Man on the Force would have a much easier time owning up to his real feelings now in the PQM (Post-Queer Eye millennium). Who knows? He might may a fun love interest for polyfreakual J'onn J'onnz (assuming he can handle the whole "driving over J'onn's butt" thing). 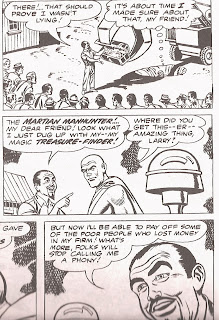 If you crossed Jimmy Olsen with a stick-- well, whatever you got would still be 10 times smarter than Larry Loder, who, for no apparent reason, is one of the Martian Manhunter's dearest friends. JJ describes him as "the most honest man I've ever met" and I suppose if you are a Martian in disguise, a really honest guy who's dumber than Jimmy Olsenstick Junior would be a perfect best friend.

Larry's been unjustly accused of fraud in the past, and is trying to make up for it with Three Magic Devices That Work Only Once that somebody just sort of... gave him. Just think about that for a while.

Yeah, Larry; a Magic Treasure-Finder is just the thing to stop people from calling you a phony. Nowadays Larry would be late-night infomercials peddling the "Larry Loder Foolproof System for Wealth and Independence".
Posted by Scipio at 3:34 PM

[H]e's got gravitas, the kind that comes from avoirdupois

That is one of the most wonderful phrases I've ever encountered.

Scip, your mojo shines like all the suns in the galactic core...

Would that magic treasure finder find all those caches of forbidden weapons the Legion keeps burying all along the time stream ?

Diane Meade, at least, showed up in the Ostrander/Mandrake Martian manhunter series as J'onn's partner at his detective agency. So that's one.

Thank you, David. It's nice to know someone notices the little things.

I wish they'd bring back Jupiter, just we could see you and your dog dressed as J'onn and Jupiter next Halloween. Also appropriate as a costume for Pride Day!

That is one amazing cast of characters, and it is a darn shame that I've never heard of any of them.