As previously promised, it's time to begin revealing the Goon Tokens for Heroclix that I've been making using photos of our readers here, generously donated. We'll be showing you a big size version for viewing enjoyment, then a small size that's just right for copying and printing out.

First up is B902, the Dirty Cop. Its stats are based on the Harvey Bullock token. It may seem a little pricey for a token, particularly since it's a slow target (with a sluggish Speed Value of 5) and an easy one to hit (with a Defense Value of 14, even figures that throw like sissies could hit this guy with rock after a couple tries).

But he's got a decent Attack Value, the ability to shoot at two targets at one and does two clicks of Damage, which is all darned good for a token.

Plus, he's got one extremely rare and very powerful advantage for a token: the Police Team Ability, which increases the Attack Value of any adjacent comrades. Add to that his Defense Power of Toughness (which allows this tough guy to shrug off any attack that only does one click of Damage). Together, those make him the perfect piece to put right beside your main villains, particularly ones that have Mastermind, because it makes them immune to any one-click attacks. 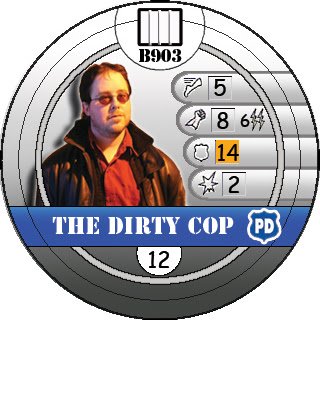 And who will be playing the Dirty Cop?

The lack of tie. The leather jacket with upturned collar. The seedy cheaters. The 'yeah, I didn't shave today, what's it to you, buddy' look on his face. Shudder.

How did this guy ever get on the force, let alone make detective? Sherlock Holmes could spot that criminal cranial development from miles away. And smell the booze, no doubt.

One look at him and you just know that last words he ever hears are going to be, "Hey, Mott; think about the future!"

I don't where he works; Hub City, I assume. And he probably only moved there because they closed Bludhaven. 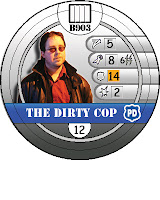 But now he works... for you! Or, at least, for whatever villain is paying his "extra" salary this month. Probably Dr. Psycho or Two-Face; their dials would work well with his.

Please note that the Dirty Cop has a Silver Ring, meaning that it is a Unique. You can only use one of each Unique on a team, so you can't surround your villains with a horde of Dirty Cops. Because despite what they tell you on TV, Dirty Cops are still thankfully rare!
Posted by Scipio at 8:12 AM

It's nice to know what all those numbers mean (I'd take umbrage at the use of the word "sluggish" to describe my speed, but it would be a false umbrage given the actual sluggishness of my movements, so I'll spare myself the effort).

It's also nice to know that that hideous photograph has finally come to good use. I still can't believe that out of the dozens of decent photographs taken during that session, my former publisher elected to use the one where I look like Harvey Fierstein's long, lost brother Hugo.

Perfect. I'll print one out as a foe for my Officer Garling and Sanders pogs

A unique pog? Well, of course it should be unique.

Any plans, once you have a bunch of these made out, to do a bystander brawl? Have all of your readers beat the crap out of each other while you stand over the map and laugh and laugh...

I actually did have Robin and the new Blue Beetle take on Deathstroke and a whole host of such pogs.

And, Nate, I laughed very loudly and long when I saw that you're using your pog as your new icon!

I take it I'm kind of late for any of the pogs, right? Nate, you should use a close up of that as icon, we can;t tell what the picture is... well, we can, but we know what it is... other people will go "wha?"