Sorry I'm not a lot of fun right now, but I'm still glowing with pain, which makes witty badinage about comic book panels and insightful analysis of structures within the medium unlikely. Or, perhaps I should say, unlikelier. (If you want some of that tune in to the new episode of the Big Monkey Podcast, and meet Black Manta's new pet.) 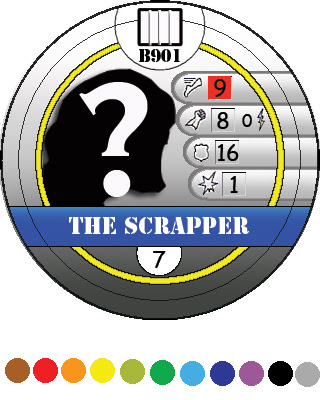 But I can craft. If you think I'm the kind of person who lies around watching the television, think again. I'm making some person tokens for Heroclix games: lots of little crooks and goons to help out the villains. The templates are all laid out, but I'm missing just one thing: pictures of crooks and goons.

Now, I could just use photos from movies and such, downloaded from the internet. But that doesn't seem quite fun enough...

This is where you come in. Send me a picture of YOURSELF looking particularly crooked or goonish and I will make YOU into a pog (much as I did for Officers Garling and Sanders). Then I will put the finished products up here on the blog for all to see and print out. Then you too can have the privilege of being kayoed by the Caped Crusaders or crippled by Green Arrow.

Oh, and these pogs are game-legal (well, except for the whole "retired figures" thing). Each one is based on an actual pre-existing Token in Heroclix, so they are playable.

The goon tokens you can submit your photo for are listed below. There are several "rules" for the photos. Please...

AVAILABLE GOON TOKENS
(ones with * should not have guns in the pic, because that token has no range)
SEND ALL PICS TO: SCIPIO@BIGMONKEYCOMICS.COM
Posted by Scipio at 4:17 PM

Black Belt it is!

I stumbled across this and figured you'd get a kick out of it: http://www.jonandal.com/audio/Track%2013.mp3

I guess I'm just not cut out for a life of crime.

Wait. . . the Gunslinger doesn't have range?


Derek, send me a pic, and maybe I'll think of something to go with it.

I'm already getting pics, and, heavens to murgatroyd, I had no idea my readers were such a cruel and criminal looking lot; yay!

My plan is to post one of these every Sunday, and I already have several that are just perfect.

By the way, I'd love some of my fellow bloggers to be part of this project.

Jeremy, I know you're reading this, and I know you could be the Running Dog or the Hireling.

Jon, you could be the Scrapper; Jonnie, the Hoodlum; Ben, the Dirty Cop.

Alright, after going through my collection last night, I can't decide. Should I go Dirty Harry or 70's Stallone Cop for you?

Will a nice black 9mm look better on the pog or a bright chrome 38?

Why not do one of each, Nate?

I will NOT be telling you what to do.

Still, the general rule is that guns are like bowties, and should be the opposite color of your outfit. White tie goes with black tails; chrome gun goes with dark suit. Black tie goes with white dinner jacket; black gun goes with light suit or casual attire.

Consider donning a suit and trying for The Crime Lieutenant, because you look Cruelly Intelligent, Ruthless, and Agile. And I mean that as a compliment.

Oh Lord, this is going to be fun.

It's already is; I've got four in the hopper, ready to post!

Which one are YOU going to do?

I've got a gun, but I don't own any clothes that look nice enough to be a hired goon. I'm more the mugger in the alley type.

We'll make it work, Chance; just send the pic and I'll come up with something.

Nate, if you could work it out with your attire, you could easily be a goon for two-face. One side black, the other chrome? Sweet!

Did you receive my e-mail, Scipio?

Yes, but I'm out of armed tokens. Do you have something like that without the gun?

Really, I'm quite astonished how many of my readers own guns. Perhaps I need to remember the next time I'm tempted to make a curt reply to a comment...!

In case anyone is still checking this I have received idea submissions for and created the following tokens:


Come on, the others are almost all gunless... they should be easy!

I'm afraid I don't fit many of the gunless ones... would you settle for a swordman (katana or saber)in a black trench and hat for any of them?

Maybe a big Tough Guy, Bruiser, or Punk with the Cobra t-shirt and the goggles (with my tattooed arm showing, and if needed, a punk hairdo? I have a sort of mohawk)?