Back when they wrote stories like "Queen Jean, Why Must We Die?", comic books had an amazing institution called the "Letter Column" (leh-tuhr cohl-uhm). It was kind of like a message board where you could comment on recent comics. But with some incredible differences:

Anyway, in the Letter Column of the comic book that contains "Queen Jean, Why Must We Die?", there's a letter commenting on a recent issue of Atom-Hawkman, the one with the first appearances of that groovy ghoulie the Gentleman Ghost. 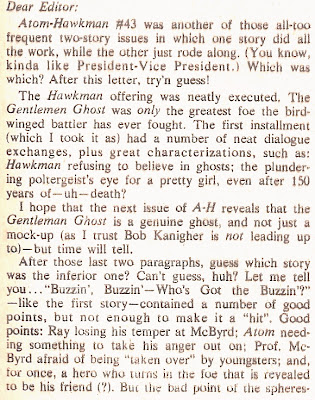 The letter-writer enjoys heroes who lose their temper and act out, generational fear and distrust, and betrayal by friends. But little-bitty flying spheres (you know, like the kind that float around Mr. Terrific?) he finds too hard to swallow.

Who could that be?

Perhaps, the kind of person who would have Batman angrily turn his back on his friends in the Justice League to form and manipulate a group of younger heroes? Yes, it was...

ENEMY OF SOCIETY MIKE W. BARR,
CREATOR OF HALO THE OUTSIDER
AND PERPETRATOR OF
NUMBERLESS OTHER LITERARY CRIMES
Posted by Scipio at 10:19 PM

I love me some halo. Chicks with split personalities put out. Ray Palmer knows that.

Halo 1.0 was cool. Halo 2.0 not so much. 'Course, Barr is responsible for a land in Katana's sword that looks like it should be pronounced Fuck You, Maiden. Let's gang up on him for that!

God damn it, this is going to end in Mike Barr hating me, as I have become a scapegoat for Scip lately. A Scip-goat, if you will.

Yeah, I was particularly impressed today when I made a comment about your girlfriend's endowments and she hit YOU.

As you'll see whether I finally give you the Lex Luthor dial, my power is called "RUTHLESS".