...and vice versa. Sometimes when you see a comic book battle, you get that sense of, "Oh, X just won the battle because the writer wanted them to, not because they could really beat Y." And sometimes that is true.

But playing Heroclix has given me a different way to read comic book battles that often makes the matter clearer for me. Maybe I'm just projecting, but I suspect that a lot of DC writers play Heroclix, too. I've noticed more and more that comic book battles have very clear strategies going on in them. Rather than "let's all run at Amazo", it's "take out his legs so he can't run; then take out his eyes so he can't attack from a distance". Maybe it's just better writing, but sometimes the scent of "Heroclix" is so strong on the strategies that I'm convinced that the game is influencing not just my reading, but the actual writing. And I like that; it makes of any battle seem more reasonable, and less like authorial fiat.

Let's take an example. Just for fun. Let's all open our copies of the Justice League of America Wedding Special No. 1. 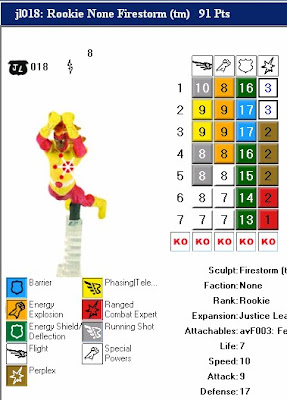 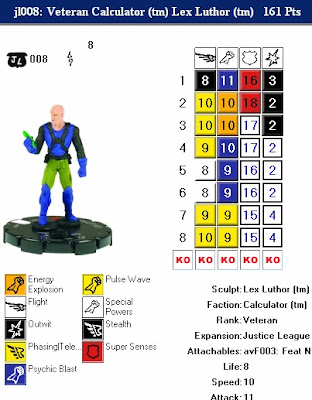 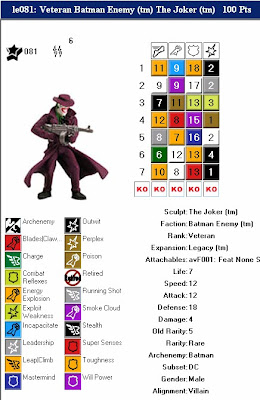 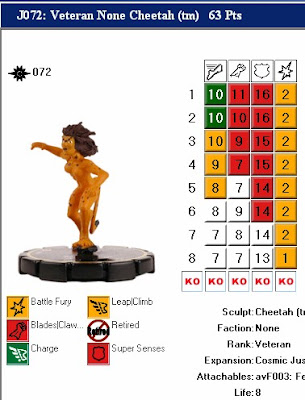 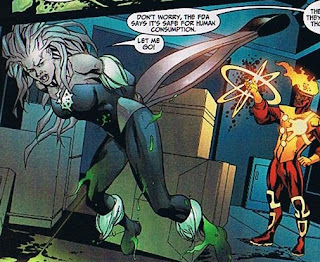 On Firestorm's turn, he just attacked and kayoed Killer Frost, so he gets an action token.

When a figure moves or makes attack, it gets an "action token" (just any little marker you care to use; at my house, we use colored beads) to show that it did something. A figure can only make one action per turn, and his team only gets a certain number of actions per turn. There are some types of actions that do not count toward all of that; those are called "free actions". 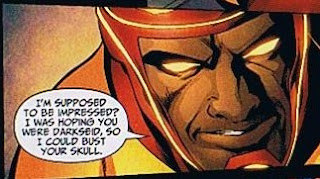 Well, it's pretty clear that with Killer Frost out of the way, Firestorm's planning on attacking Luthor & Co. soon. Oh, no! Firestorm is powerful! Are our villains doomed?

Luthor uses Outwit to cancel Firestorm's defensive capabilities. In fact, he pretty much says, "I used the power of my great intelligence to cancel out your powers."

Luthor has Outwit on his first click. Outwit often represents that a character is so smart, clever, or ingenious that it compensates for their not being superstrong or superfast.

Outwit lets you cancel out a power that an opponent has as long as you're close enough and nothing's in the way of your view to him. Better yet, it is a free action, so you can still attack somebody after you use it.

Being smart is a good power.

Then Luthor Blasts Firestorm, doing three clicks of damage. Firestorm's now on his fourth of seven clicks of life. Ouch.

The Attack power that Luthor has on his first click is called Psychic Blast. It's rather a misnomer, because sometimes it represents psychic powers and sometimes it doesn't.

The goal of attacking an opposing figure is to do it damage (which turns its dial to later, often lower, levels of power, and closer to its last click of life). Some figures have defensive powers that reduce the amount of damage they can take from a successful attack by an opponent. The value of P-Blast is that its user can ignore any damage-reducing powers that its victim has. That way, physically powerful characters like Superman can still be damaged by somebody with psychic powers (like Despero or Starro), magical power (like Mordru or Dr. Fate), the ability to 'mess with your head' (like Scarecrow) ,or just the smarts to figure out a way to do it (like Lex Luthor or OMAC). 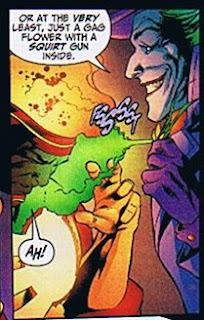 Like Luthor, the Joker has Outwit on his first click, because, while's he not the same kind of scientific genius that Luthor is, he is a criminal genius nonetheless.

Actually, in the comic book, Luthor cancels all of Firestorm's powers, but Heroclix don't quite work that way. So we are 'interpreting' this scene as the Joker and Luthor cancelling out Firestorm's attack and defense powers.

As it turns out, canceling Firestorm's Attack power is kind of overkill, because the Joker's about to make it impossible for Firestorm to act all. But the Joker is an overkill kind of guy. 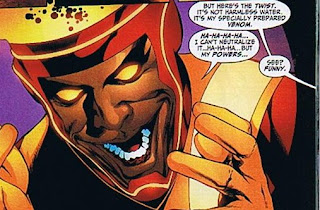 Figures aren't really supposed to act two turns in a row. They are supposed to "rest" if they acted on the previous turn, and after resting for a turn, the action token that was on them comes off.

A figure with Incapacitate can, instead of making a regular attack, 'incapacitate' a foe by adding an action token to it. This makes it either painful or impossible for the foe to act on its next turn. It's a great way of damaging really powerful figures or rendering them helpless while your more powerful allies attack it. It represents ensnaring, impeding, or otherwise debilitating a foe, rather than trying to do them immediate harm.

Firestorm already had an action token from attack Killer Frost, so when he is Incapacitated, he gets a second action token, takes a click of pushing damage, and is incapable of retaliating or running away on his next turn. Firestorm's now on his fifth of seven clicks of life. Gulp.

Sure enough, it's a classic Incapacitation "Set and Spike". While Firestorm is helpless to act or escape, Cheetah Charges at him ...

Normally, a Heroclix figure has to choose between moving or attacking. But some powers (often called "move and attack powers"!) let you do both.

One of those powers is Charge. It lets you run up next to an opponent and attack him. It tends to represent that you can fly up and hit people (like Superman, Wonder Woman, or Hawkman), that you're darned fast but not quite superfast (like Aquaman and Martian Manhunter), or that you've practiced the whole combat thing a lot (like Batman or Bronze Tiger). 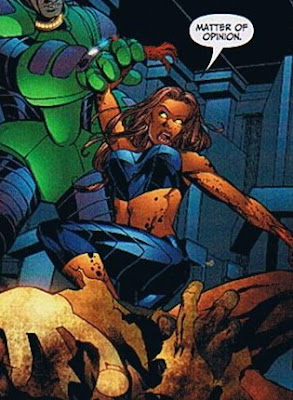 The basic amount of damage a figure can do on a successful attack is determined by its Damage Value. But that can be increased by other powers (such as Perplex, Close Combat Expert, or Ranged Combat Expert). One such power is Blades/Claws/Fangs; if your attack is success, you get to roll one die, and whatever turns up is the amount of damage you did. It's literally a crap shoot, but usually it's worth taking the chance. It represents making a lucky hit in a vital spot and that stabbing somebody is usually a lot more damaging than just hitting them.

In this case, Cheetah rolls to determine the BCF damage and gets, say, a three. Firestorm takes three clicks of damage, putting him past his last click of life. Firestorm is kayoed.

Hmmm. Interesting. You know what? This actually helped me understand HeroClix a lot better. Thanks.

Ditto what hal shipman said. In fact, if there were any Heroclix for sale where I live - and if I had any friends to play with - I'd be getting on that right now.

This is just beautiful.

Scip, I'm taking some friends to a Demo game tomorrow. May I have your permission to print this out and bring it with me.

The narrative aid really helps understand the basics of Heroclix, and my friends are going to need all the help they can get.

"This actually helped me understand HeroClix a lot better. Thanks."

"In fact, if there were any Heroclix for sale where I live - and if I had any friends to play with"

There are many place on-line you can buy Heroclix. The shipping on friends is a bit expensive, however! Maybe you could do what I do, and use 'clix as a way of making new friends. It's a good excuse to get together and pal around with other comic book readers.

"May I have your permission to print this out and bring it with me."
Please do!

You know, until reading this post I didn't realize we were using the action tokens wrong the whole time. So even a character with willpower can't move if he or she has two action tokens on them?

Damn. Makes my Brave and Bold combo of Bats/Hal a little less powerful since they actually have to, you know, rest once and a while.

"So even a character with willpower can't move if he or she has two action tokens on them?"

The only time a figure with two action tokens on it can perform an action that's not free is when it is being mind-controlled by an enemy.

Huh. See, this is what you get when you decide to buy a game for your 6 year old comic crazy son, and then spend countless hours playing it yourself with your drunken no-good friends. The rules get a little weird.

The problem is that the rules are pretty poorly written. I used to be a game designer and I spent countless hours pouring over obscure RPGs, Board Games and computer games. I know when rules are incomprehensible. Hell, my buddies and I almost came to blows one night over some of the poorly written rules.

You should do more series like this. First off, it's good reading, and second it makes the game a little more comprehensible.

"The problem is that the rules are pretty poorly written."

Astonishing, isn't it? I have told the Wizkids rules people that they need to include the spirit behind the rule, not just the letter of the rule. The spirit of the rule could then serve as a guideline for interpreting the rules (even when they are clumsily written).

Instead, they continue to write write the rules as if they were adding to the Talmud or the Federal Register.

What were those graphics at the top produced with?

Those are screen captures from BattlePlanner, a very groovy program you can use to compose Heroclix teams. It's pretty cheap, especially since updates are always free. I recommend it highly.

Let me throw all my support in favor of a series that explains the spirit of the rules then. If Wizkids won't do it, then I guess you've just been elected.

Speaking of "Outwit", there was an issue of "Impulse" once where the Joker was up to no good and Batman was on the scene. Batman gave Impulse some rules he absolutely had to follow if he was to help nail the Joker, and one of them was: do not get within ten feet of the Joker.

In Search Of ... Historical HeroClix Precedents!

"Those are screen captures from BattlePlanner, a very groovy program you can use to compose Heroclix teams."

Ah, thanks. I thought perhaps they were from a computer version of HeroClix.

(Actually, HeroClix would be a good application for that Microsoft Surface interactive coffee table gadget. You could play against someone across the internet, using your physical Clix on the table/display, and a graphical depiction of your opponent's. The table could sense the position and physical orientation of your Clix, and maybe their click status, and transfer those to the other player's computer. Maps, grids, and obstacles would be drawn by the computer.

And special effects! It'd be pretty sweet if superpowers were depicted using motion graphics emanating from the physical Clix.

Now if Microsoft can get the price down under $10,000... A non-Microsoft version could probably be made using projected video and RFID tags in the Clix and pogs.)

Actually, there IS "Heroclix Online"

It's particularly for those who have trouble finding local playing partners.

Oh, and, thank you, Chance.