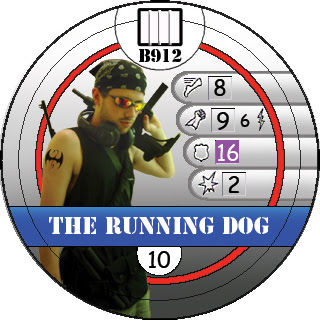 Don't you hate those craven hirelings who run at the little sign of trouble, such as the advent of a punishing alien that fires beams of energy from its hands or eyes that can level buildings? Spineless pansies!

Then you need to hire the Running Dog.

He's quiet and you can pay him in Sunny Surplus coupons.

He's armed for bear and actually looking for one. 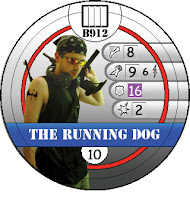 He's determined, as represented by Willpower on his dial.

And he's a pitiless, stone cold killer, the kind who listens to opera in his headphones while aiming at your opponent's pesky Lian Harper.

How can you not love this man?

By the way, we are still looking for suitable submissions of personal photos for the following pogs:

Should be pictured with gun.
Posted by Scipio at 7:21 AM

Not that this has anything to do with Heroclix, but congrats on the nice writeup of your women's comics club in the Post today!

"How can you not love this man?"

I have that tattooed across my chest. [not pictured]

Scip, I ran into another Absorbascon reader at the Starro tournament last Thursday.

We were all talking about the Aquaman figure we got last week, and the guy started talking about how Aquaman should have the ability to Mind Control Aquatic figures.

When he brought up fishclix, I knew he was a fellow Absorbacommando.

LOL! Where was that?

I'm hoping that in the next set, they will have an Aquaman that has special powers from the SOA and Starro Slave figures,

"Surge" (Charge with plus 2 speed in the water),
"King of the Seven Seas" (Invulnerability in water and Toughness out of it), and
Aquatic Telepathy,
(Perplex to any and all Aquatic characters within view).

Except it should be Impervious in water and Invulnerable out of water!

I have that tattooed across my chest."

that's not where I have it tattooed!

Thanks, John! It was a short piece, but pleasant. And I was very happy about the nice color photo.

I am hoping it will attract more women to the group!

The Gunslinger (he watches the Country/Western channel)

Okay, okay! I might send in a gun-strapping pic.

But where's your email info?

This was all the way in Naperille, Illinois.

Your sphere of influence grows.

And yes, an Aquaman with properly represented power would be nice. And I think there's a good chance of getting it; the people designing the dials have been doing a pretty good job of it as of late.

"But where's your email info?"
scipio@bigmonkeycomics.com

I get that they might not be acceptable, but did you ever receive any of my second batch of pics, the ones I took especially for this?

A simple acknowledgement will suffice.