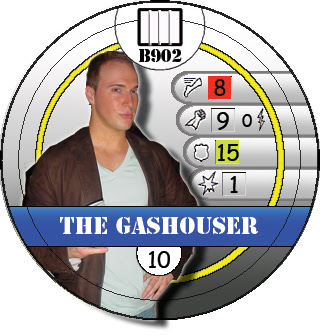 Sunday is Special Pog Day at the Absorbascon and today's is a special guy: The Gashouser.

A "gashouser" is a barroom brawler, the kind of guy who turns violent and nasty when he's got some liquor in him (which is most of the time) and spend their nights shanking other ne'er-do-wells in the guts and smashing barstools over heads. You can see it just by looking in his eye! And remember, the last guy who called him "Pretty Boy" is still eating through a straw... .

He was probably some sort of sturdy dockworker before he turned to crime. As long as I'm getting into a fight every night, he thought, I might as well get paid for it!

Even at his young age, he's been in so many fights, he's developed Flurry and Combat Reflexes (like former boxing champ 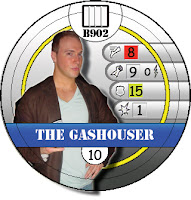 Rocky Davis of the Challengers of the Unknown, from whose token his combat values are taken).

Pity his poor Irish mother, who probably cries herself to sleep every night thinking of how far her little boy Percival has strayed, and it's anyone's guess whether he's broken more men's bones or ladies' hearts... .

The part of the Gashouser is being played by this guy.
Posted by Scipio at 7:58 AM

I hope, when you're finished collecting these, you'll make them available in a single sheet for download.

Alternatively, if you want to make these available through Xion Games, I'd happily buy a set through there, to help subsidize your hard work on behalf of the Heroclix community.

I'm happy to do that for free!

But you can just copy them yourself by rightclicking. That's why I put the small version along with the big one.