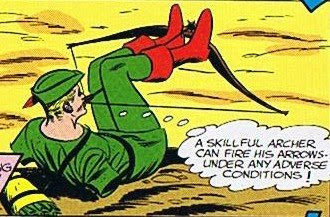 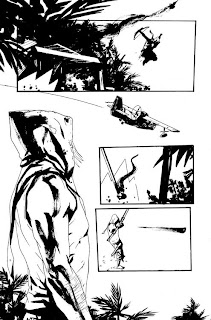 How different do YOU think the modern Green Arrow is?
Posted by Scipio at 6:26 AM

It's an accepted fact (even by the characters themselves) that Green Arrow originally was modelled on Batman (with the Arrow-Cave, Arrow-Car, a teenage sidekick, etc). I think GA has grown into his own man over the years. His willingness to hold political office, get directly involved in social issues, and carry on a romance with another superheronie (all things Bruce Wayne/Batman doesn't do) make him his own man. So, to answer your question, I think he HAS changed, but not as much as, say, Green Lantern or the Atom.

acquired an illegitimate offspring (or, uh, two...? I lost track!)

It's just one official one, really: Connor Hawke. Shado's child was the result of her raping Green Arrow, certainly nothing he can be held accountable for. And his alleged parentage of Cissie King has never been anything more than fanboy speculation.

Aw c'mon, I like ol' Ollie. Yes, he' a bit of a jackass, but that's part of his charm. Yes, his backstory is a tad on the...er...convoluted side, but I defy you to find any hero whose isn't.

And he makes chili. You forgot the chili.

And his alleged parentage of Cissie King has never been anything more than fanboy speculation.

It's a little more than that. Ollie definitely has another illegitimate child that isn't Conner or Robert, so that's three anyway. Bonnie King dated Ollie way way back, and out rights says Green Arrow's the father in an issue of Young Justice (though Cissie nervously laughs it off as a joke). And Green Arrow 1000000 refers to Oliver Queen's sons and daughters.

It kind of just makes sense.

Bonnie King dated Ollie way way back, and out rights says Green Arrow's the father in an issue of Young Justice (though Cissie nervously laughs it off as a joke).
I think that was just Peter David referencing the internet speculation, not the first or last time he's done that.
And Green Arrow 1000000 refers to Oliver Queen's sons and daughters.
Which could be a reference to "legitimate" heirs born at some time later than the present, to a married Green Arrow and Black Canary.
It kind of just makes sense.
Why?

Both Hawkeye (aka Purple Arrow) and Green Arrow have gone through bad indentity changes over the years.
I did like the Green Arrow from the a retcon Batman/Green Arrow first meeting from years ago.
A loudmouth clueless energetic jerk that wants to fight crime with a bow and arrow. No skill, resources or friends to help him out. Just batman hanging around to yell at him for being an idiot.

Maybe the idea of an archer in superhero comics doesnt work. Way back in 1941 Superman fights "The Archer" and kicks his butt without little effort. Maybe that was a hint.

What I found most interesting about Green Arrow 1000000's revelation of Oliver's descendants was that Connor took it as proof that Ollie was still alive (or at least, wasn't going to remain dead)--it never occurred to him for an instant that any offspring that he may have himself one day would be Oliver's descendants, whether Ollie was alive or not!
One wonders what that means about all those future Flashes we've seen with the last name Allen, now that Barry's only male descendant, Bart, has died without issue. Of course, I also wondered why Wally never even wondered why the only future Flash named "West" was his Kingdom Come daughter, Iris.

Green Arrow may have been the first DC character to gain a consistent, recognizable personality beyond "good person." (or "super-dick") The surface trappings are the same as the Golden Age incarnation, but no Golden Age hero would do some of the things Ollie has done (good or bad).

You know what honestly surprises me about Onomatopoeia? That he has plenty of vocal fans who think he is actually a cool villain.

And, as we all know...it's not easy being green.

I think archers occupy a special niche in superhero comics. The bow and arrow is a classic weapon, very present in the popular imagination due to the legend of Robin Hood and the Artemis stories from Greek myth. The bow and arrow is an unusual skill, moreso than being able to use a gun, and characters who use them can be interesting to read about, especially if they have a huge variety of trick arrows like GA and Hawkeye. Seeing them in action can be fun...wondering what special arrow they'll use to get out of a particular jam. It gives them a lot of versatility that a lot of "one-note" characters (Flash and his speed, Thor and his strength, Cap and his acrobatics, etc) can't bring to the table.

If guys with bows and arrows don't belong on superhero teams, then why are Green Arrow and Hawkeye so popular? Hawkeye is so popular, he won a contest for "favorite Avenger who doesn't have his own series". He led the West Coast Avengers and the Thunderbolts, and has had several mini-series over the years. GA obviously has served long stints in the JLA, and has had long-running series and features of his own.

By the way, as far as classic weapons go, the other place to look is the trusty sword. Besides the Black Knight, who else in either stable of superheroes uses one of these? Is it strange that guys who use bows and arrows show up on a regular basis but guys who use swords (Swordsman, Valkyrie) don't? Do you think it's because it's difficult to write a sword-using character without coming up with contrivances why they don't hack their enemies apart (Remember how Black Knight would hit enemies with the flat of his sword, or use a glorified lightsaber that stunned people?), whereas Hawkeye and GA can more realistically get away with incapcitating bad guys without killing them?

I'm certainly not denying that Green Arrow started out as a Batman clone. But that is true of dozens of Golden-Age heroes. Crimson Avenger and Sandman started out as Shadow/Green Hornet clones and later became Batman clones. Star-Spangled Kid and Stripesy were Batman and Robin with the roles reversed. Mr. Scarlet and Pinky. Cat-Man and Kitten. Et cetera, et cetera.

Swords are brutal weapons, designed to kill. Unless you are going up against another guy with a sword, you're going to look like a murderer. That's why they use that "flat of the blade" nonsense, which makes them look like a guy too stoopid to bring the right tool for the job.

Or like the blade-using Ninja Turtles or Wolverine in their cartoon incarnations. It's like, "CUT that Shredder fool, already, Michelangelo!!!"

Kevin Smith said in the introduction to Quiver that the story was partially about outdated liberalism in the modern world.

I still don't know about Green Arrow's "Abbie Hoffman" like rantings, and if Dennis O'Neil really wanted Ollie to be known for that. Especially how most writers make Ollie always be right if he's arguing with anyone *except* Black Canary.

The biggest exception was Brad Meltzer in Identity Crisis. Mindwiping various villains made sense. The argument to mindwipe Batman was half-assed.

Starwolf said "It's like, "CUT that Shredder fool, already, Michelangelo!!!""

Uuh.... Mike uses a pair of nunchaku, which can beat you black and blue six ways to sunday, but never cut you... I think you meant Leonardo. *geeky grin*

It seems that GA hasn't so much changed over the years as had some blanks filled in. He used to be a cipher--just some dude with an Arrow Plane and arrows with moose antlers on 'em. Not a lot of personality, beyond bland Golden Age Go-Get-Em Heroism. Now he's the same guy, with a smidge of texture.

He's a lot more like his golden age version now than he was during the Grell years. Ollie's reverting to his origins, sorta.

"It seems that GA hasn't so much changed over the years as had some blanks filled in."