The Madness of Queen Jean, 1

Hit the ground, folks; this is going to be oomphy.

This series of posts is brought to you by the generosity of Absorbascommenter Randy Sims, who sent me in a copy of The Atom & Hakwman No. 45 ( Nov. 1969), starring that Maven of Madness, the Addle-pated Attorney, the Psycho Solicitor herself,

I would give good money to see the thought balloons of those jurors.
And Harry's Hot-Cha Hacienda.

Good lord, Jamie Madrox has been recruited by the Sinestro Corps!
with Jean hallucinating, 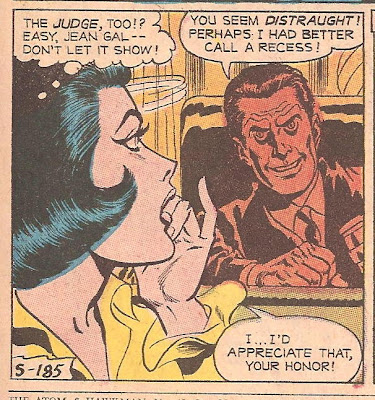 "Don't let it show!"
Jean's had years of practice hiding her madness.
descending into paranoia, 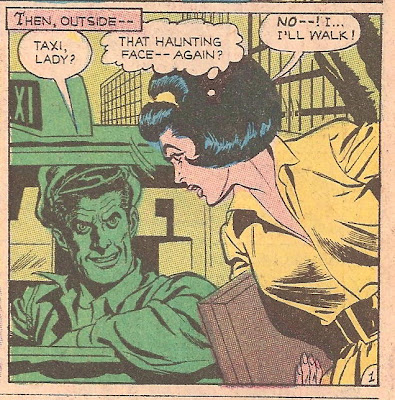 Well, at least ONE of them joined the Green Lantern Corps instead!
Probably the gay one. 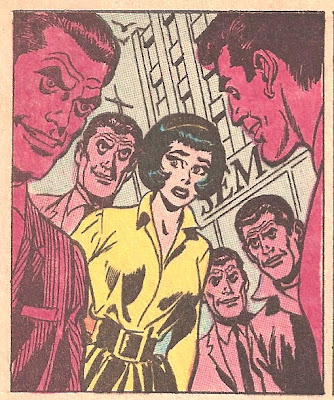 Uh, yeah, Jean, if I wore a cinch-belt that tight,
I'd be hallucinating, too.


Yes, Jean, everyone is staring at you.
But you're the one who decide to wear ... 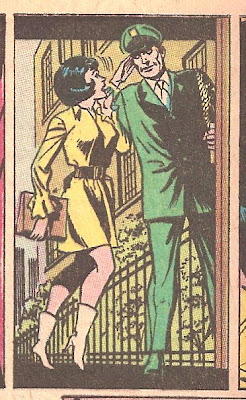 those boots.
To court.

Gather round, kiddies, while the old Crypt-Keeper tells you a heart-warming tale of madness, enslavement, and death, one that I like to call... Unfortunately I was drinking Pepsi when I read this. You owe me a new keyboard.

A full 30% of my annual income, you know, goes to replacing other people's keyboards... .

I'm thrilled to see this on here. From the sounds of the podcasts, Devon has recovered fully from opening the package.

Scipio, you realize that the more you talk about how crazy Ms. Loring is, the more a certain segment of your audience (read: the short Canadian dude writing this) finds her attractive.

I suspect that by the end of this particular series of post I'm going to want to find a way to break beyond the fictional barrier and marry her.

Can't wait to see how you handle the remaining chapters.

I love that first panel, with Jean teetering about in her impractical boots, desperately trying to keep from falling on her ass during her opening statement, while Carol Burnett gapes at the cigarette burns on the back of her hand.

Even more shocking than Jean's dementia is seeing a non-mocking reference to a Marvel character.

One written by Peter David, in fact.

Oh Jean, Jean, where to begin? I LOVED your hat and gloves when you were chasing Ray through South America...THAT'S what you should be wearing to Court, my dear. Go go boots are right out. I don't CARE if they match your ensemble.

The little ruffle at the wrist however, was very nice.

As regards the boots, let us not forget that this comic was published in 1969. Her attire was conservative, for the day.

"Certainly not . . . Denny O'Neill!" is gonna be my default answer to any conundrum henceforth.