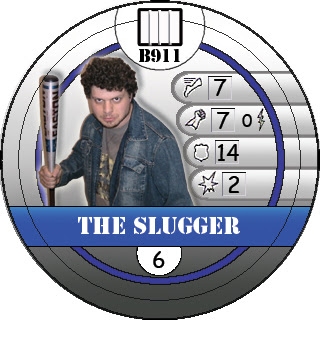 As Sunday readers know, I take this day to share thuggish Heroclix tokens I've made of friends and fans of the Absorbascon.

Our next pog is one without range:
B911 the Slugger.

This token gets it's combat values from the Tawky Tawny token. Rahr!

It can do some serious damage if you let it get close enough, but it tends to swing wild, so if you're lucky you can pick it off before it reaches any of your vulnerable pieces. Just don't ignore it until the last minute; you'll be pretty mad if your overconfidence allows this punk to clobber one of your DEO Agents.

The Slugger is portrayed by Australian ne'er-do-well Ben "Baseball Bat" Wynne, who was kind enough to send us this photo of himself from his Reform School Yearbook, in which he was voted Most Likely to Bludgeon. 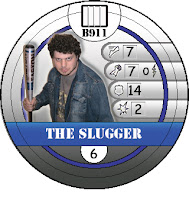 I tried to use the Slugger in battle the other day; sent it up against the Yojimbo, who calmly shot it below its strike zone.


I swear, all of Australia must be like one continent-sized Tarentino film...
Posted by Scipio at 10:12 AM