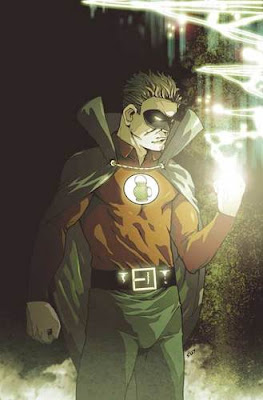 I mean, really; is there anyone who thinks the modern Green Lantern is the Least Changed from the Golden Age version?

According to our current poll, there are. Talk to me. Explain to me how that's possible. The number of votes Green Lantern should have is ZERO, people!

In the Golden Age, the Green Lantern was Alan Scott, the sole person who became the inheritor of a lantern made from a strange mystic meteorite that had fallen to Earth thousands of years ago.

Three times would the meteorite flame. Once to bring Death, once to bring Life, once to bring Power. The first time it, um, killed some bad guys, I think. The second time, I remember quite clearly, it cured someone of insanity. The third time was when Alan Scott found it, and it granted him the power of the Green Lantern.

The creator of Green Lantern said he was inspired by his seeing train engineer use a red lantern to signal "stop" and a green lantern to signal "go" (a coding system auto traffic signals still follow). Alan Scott was to be a modern Aladdin, and the lantern his magic lamp. And, contrary to what anyone tries to tell you, the ring and its wielder were originally vulnerable to any substance in its natural state, such as a rock or a piece of wood. Bullets, being of a man-made alloy, were stoppable. That made a (fairy tale-ish) kind of sense, since the ring was some kind of nature magic. Only later did this vulnerability get narratively narrowed to wood, because, wood being plentiful, was most often used to fell Scott.

The modern Green Lantern is an entirely different person. And concept, really.

Alan Scott was always portrayed as a very successful engineer, later radio broadcast, later broadcast executive. Alan Scott was a leader, in both his professional and heroic roles. And as Green Lantern, he intentionally designed a bizarre costume to freak people out. He lived in Gotham. Green Lantern was creepy. 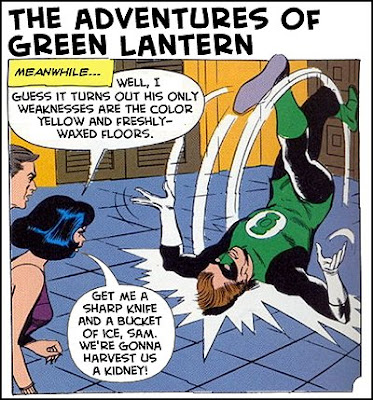 Hal Jordan? Not so much. Hal's only creepy in a "Yeah, wiseguy... she's my daughter!" kind of way.

No, really; I intend no offense to Hal. TRUST ME, if I want to make fun of Hal Jordan, you'll know it. But Hal was always portrayed as a maverick and professionally troubled. In the Green Lantern Corps, he was portrayed as a star, or an MVP, not "Team Captain". Flash, Aquaman, Superman, Batman, Black Canary-- they've all been portrayed as leaders of the Justice League. But not Green Lantern. In fact, in JLA Year One, the very idea that Hal should be in charge was played as a joke.

Oh, and the Corps. The essential concept of the ring/lantern has changed. It used to be mystical. It was like a living thing, a thing of flame, which could used to do a wide variety of whatever-the-plot-required stuff, but was very seldom used to make concrete objects. The modern Green Lantern? A cold, hard computer, that displays analyses, forms "constructs" of, well, something green (Solidified light? Plasma? Whatever). It's weakness (when it has one) is a bandwidth in the electromagnetic spectrum. Instead of it being a one-of-a-kind item, there's now one in every cosmic CrackerJack box from Oa. Green Lantern isn't a secret identity, it's a title or a job, like "Marshall".

Alan Scott was his own man, trying to wield responsibly an enormous power that was his and his alone. He still is. Hal Jordan (and his ilk) are disposable flunkies, cosmic deputies using power borrowed from their alien bosses, symbols that we live in a police protectorate galaxy (and why nobody's punched Green Lantern's lights out on that basis alone, I do not know).

The only modern age hero I can think who's less like his Golden Age counterpart than Green Lantern is...

And, contrary to what anyone tries to tell you, the ring and its wielder were originally vulnerable to any substance in its natural state, such as a rock or a piece of wood.

As much as I hate to pick nits, that isn't exactly true.

In the earliest stories, Green Lantern's ring protected him against metals and only metals. In All-American Comics #16 he was knocked out by a leather blackjack; in All-Star Comics #4 by a glass bottle. Neither substance is in its natural state.

If I may, I think Geoff Johns on some level has picked up on the "police protectorate" vibe with the Silver Age take and set up Hal as a real rebel (which is to make him more sympathetic). I seem to recall some passing response to Green Arrow's disgust over the rings recording everything to the effect of "The only people who have something to fear have something to hide," so... Um... Hmmm.

Though it's not like the Guardians never, ever make mistakes. I'll leave it to you to judge if offering Hal leadership of the Corps for the second time now is a bungle on the level of, oh, the Manhunters being created.

As for the high "turnover" rate of Green Lanters... Why nobody's ever compared them to the Judges of the Mega-Cities on that basis alone, I know somewhat.

Great comparison piece, though, Scipio. I think I sensed a bit of praise for Alan Scott in there, too, and that's always good to hear or see. I mean, even though I like Hal -

Mart Nodell created not only the Golden Age Green Lantern, but also the Pillsbury Dough Boy. The more you know!

Tell me that "The Adventures of Green Lantern" is a single-panel ongoing mock-comic strip somewhere. I would totally subscribe to that RSS feed.

Golden Age heroes who are less like their modern counterparts than the Atom:

- Captain Marvel (if you'll allow for a fair amount of cross-company name-thievery. Xam!)

Maybe they ment Alan.
After all, some of the people voting Flash meant Jay.

ridiculous character that doesn't belong in its national Justice Group, and is only there to make the real heroes look better?

totaltoyz is right -- originally the Green Lantern mythos was tied into the Chinese system of elements (earth, fire, metal, water and wood), where each element has power over another element while being vulnerable to yet another element. So the Lantern's power was especially resistant to attacks by metal, but especially open to attacks by wood.

As A huge Alan Scott fan, who is not a big Hal fan, I thank you for this.

Blue Beetle's not a whole lot like his Golden Age version. Crimson Avenger, if we want to dig that deeply. Human Torch? Vigilante?

Um, I voted for him because Alan Scott hasn't changed a lot. Well, his name has changes and they call him Sentinel now. But he still seems pretty similar. But then I think I misunderstood the concept.

I mean, yes it's obvious to me that Hal Jordan is different than Alan Scott. But it seemed so obvious, that I figured that couldn't be what you were asking. I mean, G'Nort and Katma Tui and Guy Gardner and Kyle Rayner and John Stewart etc. are also different from Alan Scott. But that almost seemed like cheating, because there were lots of folks who were Green Lanterns.

However, the overall power (ring that creates things) is basically the same, unlike the Atom, or Red Tornado.

originally the Green Lantern mythos was tied into the Chinese system of elements (earth, fire, metal, water and wood), where each element has power over another element while being vulnerable to yet another element.

Wow...I never thought of it that way. I always thought it was done that way because most methods of attack that would be used by criminals (bullets, knives) were metal, but they needed a way for the antagonist to knock him out otherwise the stories would be repetitive and dull. I never considered the Chinese elements angle.

Gosh, I do love Alan. How can you not like Alan? He takes that ridiculous costume and makes it WORK! He is also one of the few people that Hal Jordan is actually in awe of, which also works. Even Batman is secretly a tiny bit thrilled by Alan.

And thank you for the "Hal falling down again" panel. Made my day.

OK, I have to cry foul on the scoffing I read here on the idea of Hal leading the Justice League. He HAS led the Justice League. He led the Justice League Europe after Captain Atom became lost in the timestream (Ah, remember the days when Captain Atom was a major player in the DCU?). Lest you scoff at the JLE, the group had Flash, Elongated Man, Power Girl, and Metamorpho in it...it was no group of fourth-stringers. He's also led the GLC, as noted above, as well as a small group of earthbound GLs for a while there. Hal's got plenty of leadership qualities. I always figured his GLC responsibilites kept him from being the JL leader.

Alan Scott's a bit like Green Arrow, in that he changed radically over the years, and then just kinda changed back. Remember when he first became Sentinel? With the de-aging and the different costume?

His origin was pretty heavily retconned over the years too, what with the Starheart business.


So wehre's that Hal falling down panel from?

Wait, I know who's changed the most: Starman. He used to be a not-explicitly-religious guy who was all about downplaying the drama. Then he changed his costume, swapped the rod for a staff, took to calling himself "Homopater", started speaking Spanish, and picked up this weird hard-core Catholic vibe. Homopater!

It will not succeed in reality, that's exactly what I think.
metal buildings