Next in our on-going series of goon tokens to assist your villainous Heroclix figures is the classic Gunman. 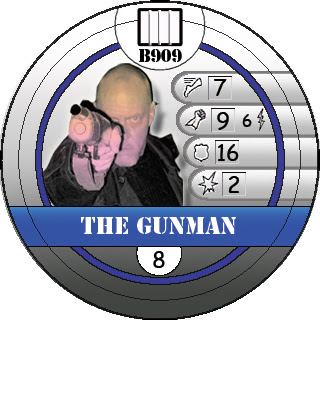 The Gunman gets its stats from the Sarge Steel pog (and very nice stats they are, too, particularly for only 8 points).

Perhaps you don't want to spend a 100 points on tokens every game, but there are worst investments than a handful of Gunmen. Don't underestimate the amount of damage some Gunmen can do to the host of figures without any damage-reducing powers. Black Lightning, Alan Scott, Mister Miracle, Batman, Halo, et al.-- they could all get shot by the Gunman.

And who is our charming model for this token? The Gunman is Michael "the Mutt" Conway, who's currently wanted on multiple counts of Assault with a Deadly Weapon and Generally Looking Really Mean. You wouldn't know it to look at him, but Mike's a thespian. Of course, if you call him that to his face, you'll be eating bullets for breakfast. 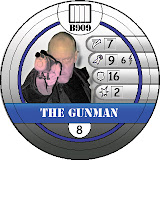 Mike earns a really nice living using human beings for target practice, but he still shaves his head with a broken bottle, not to save money, but just because he likes the feel of it.

Mike the Mutt looks like he lives in a bad neighborhood, but there's one nice thing about it: no squirrels. Not any more.
Posted by Scipio at 9:44 AM