When last we left Carter and Ray, they were imprisoned together and wearing harnesses (much like the young gentlemen in that film classic, The Super-Stalag of Space; but I digress). 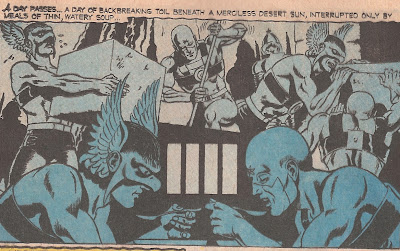 Love really is blue.
Presiding over their cerulean imprisonment is the madwoman, Queen Jean, who answers the decades long mystery of "Whatever did happen to Phantom Lady's original outfit?" 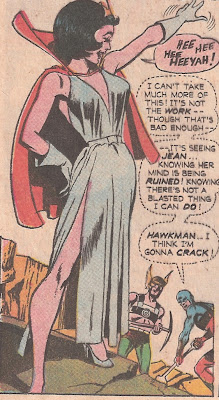 Ray. Dude. It's been exactly one day. Man up.
So Hawkman and Atom decide to fall for each other... literally. They fake their deaths by falling over a cliff (saved, of course, by Hawkman's wondrous Nth metal). 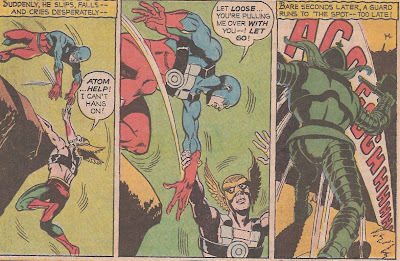 The shock of seeing her lover plummet to his death breaks through Jean's madness, and she cries out to terrified agony at her loss! 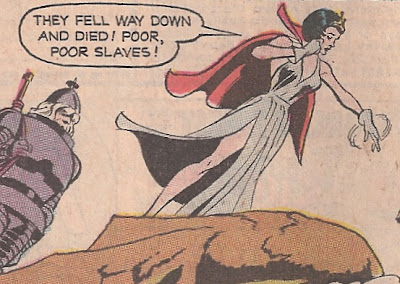 Then the Atom frees himself and Hawkman from their anti-theft harnesses using DC-patented silver-age-superscience. 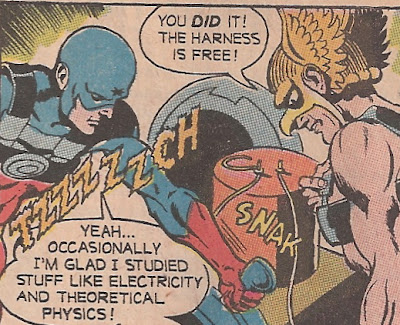 Or simply "stuff like electricity".
Hawkman looks so disappointed when he says, "the harness is free". You know how he likes harnesses; I think he was hoping the Atom was hooking those electric cables to his nipples. Thanagarians are not delicate people.

Then, as they rush to kidnap Queen Jean and make their escape, Hawkman, in an uncharacteristically Morrisonesque violation of the fourth wall, comments on virtually every man I've ever dated... 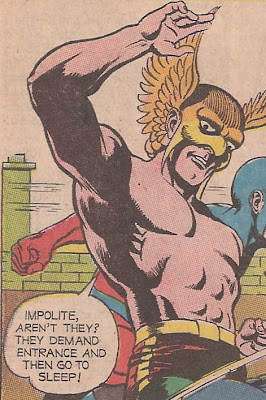 Hook electric cables to your nipples too much, Hawkman,
and you burn them right off. 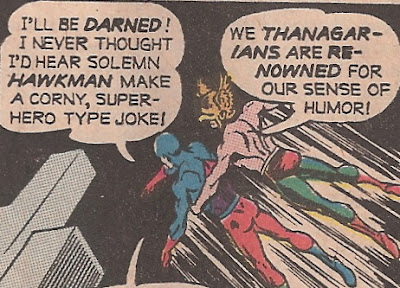 And if you don't laugh, I'll cave your skull in with my mace.

Once they reach Queen Jean, her relief at her imminent rescue is palpable!

Or not.
So, rather than using Hawkman's brawn or the Atom's brains, Ray guilts Don Quixote into letting them go with a black belt Emo-chop.

"These aren't the droids you're looking for..."
Frankly, I think Don's just terrified of Jean, and is happy to be rid of her.

So, Ray re-enbiggens them all, and Jean regains her senses 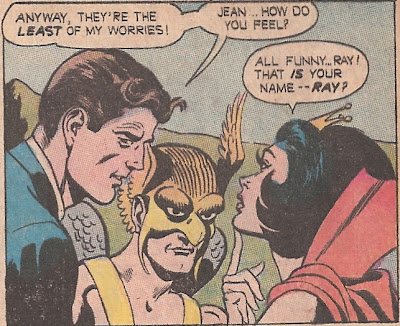 or they cure her. 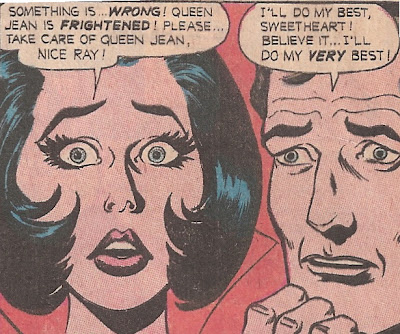 Wait a minute -- somebody made a film version of "The Super-Stalag of Space" and didn't even consult me? I haven't even received any royalties! And what about the "back-end participation?" (That's a standard in every deal I make, business or otherwise.)

And for the next installment in the story:

I remember the guy who played you.

He couldn't resist Nardo's third eye any better than you did!

ROFLMAO!!! Yeah, maybe she got the design idea when she mind-wiped Jean for something or other!!

hehe. that bitch! she really IS evil!