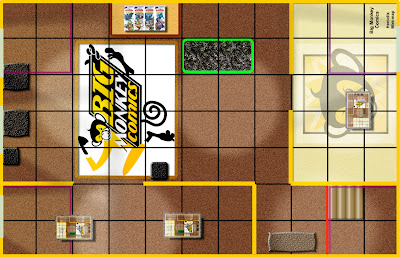 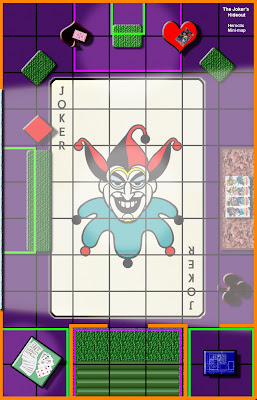 haha...I don't even play heroclix, but that Joker's Hideout map is awesome! =D

(verification word is HDEEUQ, which is probably what 'hideout' sounds like when you cop a kick to the family jewels halfway through saying it..)

Ow! There are mini-maps within the big monkey map. Meta-contextual-post-modernism!

Indeed; thanks for noticing that, Nate!

I did that in case Grant Morrison was to play.

Scip, you cats at Big Monkey play clix like I wish they played clix everywhere. Now that the entire JL set list has been released, are you as impressed as I am (ie, very)?

Any way I can get every map, pog, etc. emailed to me in glorious high resolution? It would be VERY appreciated.

Thanks for all the effort. You're blog never fails to amuse.

That's doable, Tate; send me at email to scipio@bigmonkeycomics.com tell me which you want and I'll follow through.

Does the Big Monkey Comics map come with Quarter Bin Special Object (filled with copies of every new series to come out of Zero Hour except Starman)?