Hal Jordan should not have a power ring.

4. As previously proven, Hal is a total dork. 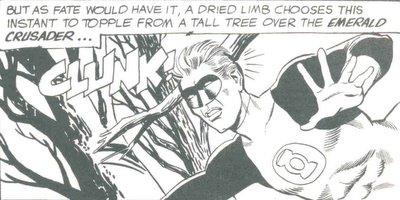 Sure, Batman gets hit on the head a lot -- when he's fighting. Not just because the universe itself hates him.

Thank GOD poor Carol didn't have to see that. It's embarrassing enough being GL's public squeeze. "THWACK", by the way, is the sound of toy airplane hitting an empty head. Of course, judging by her word balloon, she's not exactly the brightest star in the heavens herself...
Posted by Scipio at 4:03 PM

Actually, Hal Jordan shouldn't have a power ring 'cause his greatest power is his magnetic head.

If he should ever learn to harness his awesome magnetic head power, the world will tremble.

I can just picture Alan Scott, burying his face in his hands...

Actually, this explains a lot of Hal's behavior. Brain Damage.

He's really harmless, after all.