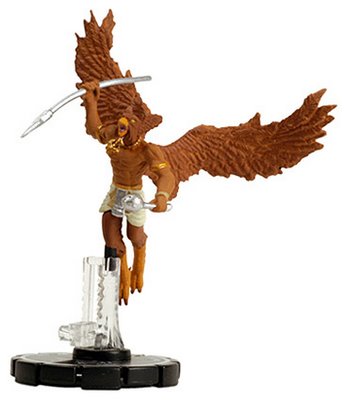 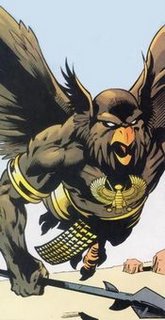 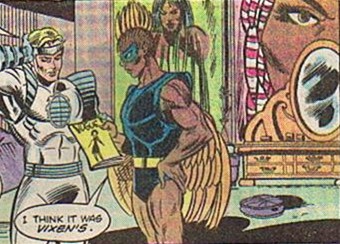 Northwind tries desperately to convince a teammate that
the copy of Vogue in his bedroom actually belongs to Vixen...
Posted by Scipio at 9:58 AM

I would worry more about ultra-alpha-male testerone-drenched Hawkman's biological son, the Silver Scarab (seen to the left in the same panel).
That guy is Vogue-posing.

Hector: Vogue posing?! What about Norda? He needs a makeover far more than I!

And here is my caption for the night;)

Actually, it's a shame that noone ever bothered to follow up on the plot that Northwind was studing the mystic arts towards the end of Infinity Inc. That could have at least given him something useful to contribute somewhere. Yet oddly, he's still not as big a mess as Hector Hall was...

As a general rule, despite my personal aesthetic bias in favor of anthropomorphics, I agree with you about the detrimental effects of Zoonification. Killer Croc was definitely the worst victim of the syndrome, going from a large and aggressive but capable and intelligent CRIME BOSS to Bat-Land's resident Dumb Muscle and, in the animated series, Running Joke.

On the other claw, Northwind was easily the WORST character design in all of Infinity, Inc. -- and that says a LOT. The stubbly scalp with the feather crest that never quire looked right. The feathers supposedly growing out of his arms that never quite looked attached, the mask that he stole from Selina Kyle's '60s wardrobe... ECCH.

Redesigning him to take after his mother's side of the family is a VAST improvement.

It's not like you can say that this "ruined the character", either. Even after most of the other Infinitors moved on to supporting roles or JSA memberships or much-deserved demises, Norda got shuffled into Limbo.

And why? Because he was EMBARRASSING. He didn't have the "I'm Absurd and I Know It!" geek-cool that makes Bouncing Boy and Matter Eater Lad fan favorites.

He was, in short, a prim candidate for Blockade Boy's makeover service.

But Alex Roth got to him first, and frankly, I think he came out the better for it.

"As a general rule, despite my personal aesthetic bias in favor of anthropomorphics, I agree with you about the detrimental effects of Zoonification."

Maybe it's a directional thing...?

People that become like animals -- Croc, Charaxes, the Hellgramite, Cooperhead, Man-Bat -- are not.

So,any Furries out there want to weigh in on this puzzlement?

Anonymous asked: So,any Furries out there want to weigh in on this puzzlement?

What do you think I meant when I referred to "...my personal aesthetic bias in favor of anthropomorphics"?

And Scipio: Harsh not upon the Man-Bat! Despite the poor handling to which he's so often been subjected, Doctor Langstrom has long been one of my favorite characters, since my hatchling days, when I proudly owned every single issue of his eponymous title --#1 and #2. No one-shot wonder he, naysayers! Messrs. Timm and Dini did not select him to introduce their definitive reinvention of the Dark Night by chance or accident.

However, I believe that, 'twixt the two of us, we've found the key to the successful blending of human and animal. It is indeed directional -- but not physically. You see, for me, Dr. Langstrom's alter-ego was the most interesting in that so-brief period in the 1970s, when he was written as a hero (or, well, a bounty hunter), someone in control of his transformation, and using the abilities it bestowed to fight crime.

I was gravely disappointed when subsequent writers returned to the Jekyll-and-Hyde mindless-monster formula -- not merely because of the loss of an intriguing protagonist with unusual abilities, but because it was the cheap, lazy route. "He looks grotesque, so he must be a monster; he looks like an animal, so he must be mindless."

And that's the key. It's not the physical changes that have so degraded Killers Croc and Moth, Copperhead, Doctor Langstrom or poor Northwind -- it's that they've been saddled with animalistic behavior, as well. It's the mental zoonification that has turned these characters into tired and tedious clichés. It's a cheap and easy route that so many lazy writers have taken that it's easily confused with the physical changes.

It's not limited to Zooanthropic characters, however. Vandal Savage is at his least intimidating when he acts like a caveman -- and Gorilla Grodd is unimpressive when he acts like a violent, barely vocal ape, as he has all too often in recent years. On the other side of the aisle, the long, dreary years of "Hulk Smash Puny Humans!" are less than incredible -- and less than credible -- when compared to the complex psychological explorations of Peter David and those who followed.

The other side provides a counter-example, as well: Doctor Henry "the Beast" McCoy, mainstay of those uncanny mutants with the innumerable titles. As his character design has become increasingly animalistic (explained in-story as the progression of his mutation), his always-erudite persona has become ever-more intellectual. As a result, the big blue lion-man of current issues has become even more compelling.

To me, at least. But I'm one of those dratted Furries.

I know that Scipio (and probably many readers too) is gay. I'm not, and I hope my comment is not taken as an offense... but Northwind and Silver Scarab are two of the gayest superhero designs EVER!

We all know who suffered the most from zoonification. That's right, Killer Moth, who went from rich supervillain with Godlike confidence, to being REPLACED (there, the truth is out, tell your friends and family the Drury Walker and Cameron Van Cleer are sperate people) by a wimpy, sniveling, loser who's biggest dream was to become a giant, cannibalistic moth. On a side note, I really miss the old mobster Killer Croc who was so awesome that The Joker had to lead an Arkham breakout just to take him out of power.

Original Northwind is only funny because of his similarity to obscure Marvel villain and attempted-Scourge victim...
Gamecock
Yes, a man dressed like a rooster named Gamecock.
And Northwind looks just f'in like him!
http://www.marvunapp.com/Appendix3/gamecockcap.htm
Thats what I thought, dissenters, revel in my brilliance!