Honestly, all I really want to know about this cover... 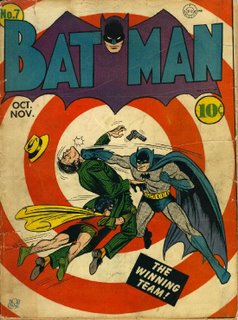 is exactly how Robin learned this move: 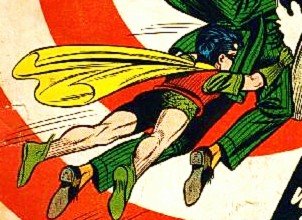 Practice, my dear Scipio. Hours and hours of practice. Not that there's anything wrong with that...

Is this one of those comics where the heroes aren't fighting a cool villain with some awesome name, but instead some generic drug dealer or mobster?

Generic mobsters for this issue. But I should'nt have to tell YOU. After all, "The Shadow always know"...

Ahh...I remember the issue. "The Case of the Man with the Magnetic Taint." A classic.

Clearly he learned it in one of the Marvel-DC crossovers, as documented here.

Robin spent something like sixty percent of the Golden Age nose-deep in well-dressed criminal ass. That's why he's so grumpy now.

WHOA! NEW LAYOUT is so different!

Well, I can't argue with JLA Starring Vibe, but that red font is tough on the eyes. Maybe I'm just getting old.