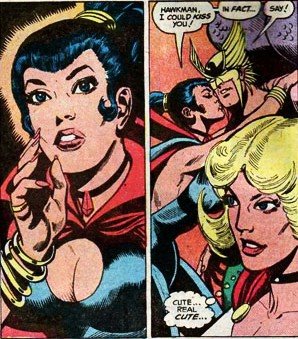 when even Power Girl...

thinks you're a brazen hussy?
Posted by Scipio at 6:38 AM

Did I miss a memo? Because I'm not getting it. I don't recall any comic in which Power Girl is characterised as any kind of "brazen hussy".

I believe that the OP is implying that Power Girl thinks Zatanna is a brazen hussy.

(And not without cause.)

Well yes, but the implication of the "even" is that Power Girl would not think this unless the situation were extreme. Why is she singled out?

Because right now it seems as relevent as saying "how bad is it when even Green Arrow notices you are wearing a hat?"

It's very, very bad when Green Arrow notices that you're wearing a hat.

And notice to Scipio: I don't know if you were aware, but Hal Jordan got hit in the head with some space debris in Ion #4. It wasn't an impressive hit, but it was there...

I've been confused for a while about the way so many writers seem to have confused Power Girl's costume with the bulk of her established characterization. I keep continuing to think of her as the mostly bad-tempered ball-breaker that she started out as, despite the many more recent comments that various writers have made about "Most men like her". The way I remember it, her only actual friends were the Earth-2 Huntress & Wonder Woman, and most men, including both Supermen, were at least a little afraid of her (or at least irritated by her attitude), with only Star-Spangled Kid & Firestorm so mesmerized by her cleavage that they never quite noticed what went with it. But then, I also find it odd that none of the writers who make the hussy-like comments about PG have ever seemed to write her quite acting that way.
It should be noted that Power Girl began as part of a sub-specied of comic book chara known as "Conway Women", who were a transistional phase from "Stan Lee Girls" to "Clairemont Goddesses", and included Thundra from the FF and Ms. Marvel (and briefly Namorita), who were pretty much all interchangeable "tough broads" who thought all men were incompetent, and had no qualms about pointing that out as often as possible.

I didn't read it as Power Girl is a "brazen hussy", personally; more that she is the least likely of the groups' women to be judgemental about another woman's sexlife.

Brian has it!
I was gonna link to your article where Green Arrow tells Wonder Woman to stop embarrassing the League, for another example of this, but I couldn't find it.

Also, I just tried to listen to Superhero Radio for the first time, but Live 365 says "this station is currently not available".
What has happened?!

Verification word: "hfbnrl" is the sound I made when I found out Superhero Radio was down.

It is my long-held career ambition to one day be regarded as a Brazen Hussy.

Every day brings me that much closer.

Not only do I not get the "even" in Scipio's post, it's not clear to me that Power Girl is calling Zatanna a "brazen hussy" at all.

Is this before or after Zatanna targets Dale Gunn? (Before, I'd guess...looks like Satellite-Era.)

I always thought it was because of her gradual slipslide into the Vertigo Universe that Zee is protrayed as having a healthy and enthusiastic sex life, but I can see now the ground work for that characterization is even in the G-rated comics, huh?

But I still can't picture Hawkman (Earth-1 or -2) responding with a surprised "Say!" to Zatanna's nose-kiss.

A DJing oversight on my part; Big Monkey Comics Radio has been restored.

PG: "I guess there's something about Zatanna that breaks down a man's defenses."

Gee, I wonder what in the world it could be. Hmm...

Speaking of cleavage windows, how is Zatanna's suit staying up if it's backless?

How is Zatanna's suit staying up?

(She has, at various points, been one of the most powerful magicians in all of DC continuity. And even when she wasn't wielding her full powers, that sort of "wardrobe" thing presumably would have been as automatic for her as breathing.)

Sure, it's all fun and games until they kill Mr. Terrific.

Speaking of cleavage windows, how is Zatanna's suit staying up if it's backless?

I don't see what the issue is. The front is attached to her collar, which is attached to a cape, which should be more than enough weight to keep her outfit in place.

But I suppose there could be some double-stick tape involved, too.

Hmm...I'll buy Ian's explanation. A cape is too flowy to keep that skintight suit in place. But john, you have a point-- and doublesided tape is magic to beauty pageant contestants everywhere.

Sure, it's all fun and games until they kill Mr. Terrific.

And afterwards, it continued to be pretty much all fun and games.

Not only does Zatanna have a cleavage window, her breasts are even bigger than Power Girl's. Was she copying PG's method, or something?