Kate Spencer is the culmination of a long legacy in the DCU of previous characters named "Manhunter".

In Issue #7, we meet the original one, Dan Richards, who first appeared in Police Comics #8, March 1942. In later issues, we meet other "Manhunters".

You know how Jack Knight was the culmination of the Starman legacy? Kate's like that.
' 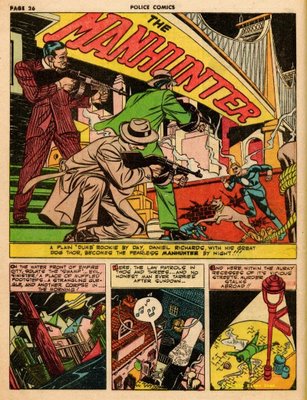 But Starman didn't systematically introduce and then kill off most of the legacy heroes in such a short space of time.

I actually think this was the main mistake they made early on in the book, especially since after severing so much of the legacy, then then go and force a tie to other legacy characters who aren't called Manhunter in the more recent issues.

While I agree with the other reasons so far, the handling of the previous Manhunter characters was a missed opportunity in my book.

I, too, was saddened by their loss.

On the other hands, it's not like they were doing anything else with them...

There is no better DC legacy than the one presented in James Robinson's Starman. Robinson tied a superhero family to a cop family, to a superhero community, to Opal City and it's history. If Manhunter managed to do that in twenty-odd issues, I may have to stop reading comics altogether.
And for the record, only two old Starmen (out of six) died in the series, and that was at the beginning and right before the end.

I did think it stretching things a bit the way Robinson connected all the DC characters with the last name of "Savage". Matt Savage, Trail Boss begat Brian Savage, Scalphunter who begat Steven Savage, Balloon Buster. I was expecting Doc any minute there.

That's gorgeous Golden Age artwork there, who's responsible? Why yes, mostly Marvel- why do you ask?

While I wouldn't say it's *better*, it is pretty awesome. Especially the issue where the secret origins of Kate's costume are revealed...

Hope you guys don't mind a slight digression from the conversation, but I kind of wish Mark Shaw wasn't used after Archie Goodwin and Walt Simonson's work on the character. I definitely liked their Manhunter, but I felt Goodwin and Simonson wrapped things up rather nicely.

The second snafu, for those keeping score, is tying her to Al Pratt of all characters, trying to force out a legacy after doing everything they can to eliminate the obviosu one.

Of course the Al Pratt thing has turned out to be a swerve, and instead Kate turns out to be part of the extended Starman family tree...

Man does she ever have a complicated background now. Granddaugter of an Earth-X superheroine (who is the cousin of an Earth-2 superhero) and the Earth-8(?) stand-in for the Earth-2 Superman in post-Crisis continuity.

Goodwin and Simonson wrote Paul Kirk Manhunter. After their storyline, he was dead (although he did have a clone show up in Power Company). Mark Shaw was the Manhunter from First Issue Special, who went through and identity crisis in the pages of JLA and then moved on to his on series with a brief stopover in Suicide Squad.

Woops, my mistake: always get those names confused :b Thanks for clearing that up