Okay, speaking of the JLA-Detroit, this is long overdue. 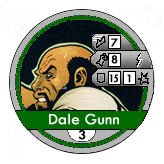 Put some Gunn in your Heroclix game! I put him on teams with Vixen, Zatanna, Aquaman, the Martian Manhunter, and my custom Vibe (or when I'm feeling special, my custom Breakdancing Vibe.) If you want, you can use

the Special Dale Gunn Rules:
For maximum enjoyment of the Dale Gunn pog, tape it to the underside of your car hood for one week before using, store it in a humidor full of inexpensive cigars, and play an Isaac Hayes CD while using him in the game.
Posted by Scipio at 6:40 AM

And if female characters other than Renee can't attack him (non-sexually) and can't breakway, how many turns does it take before Dale just gets tired and lets them go? After all, there's monitors to repair and cigars to smoke.

And what do you have to roll to make a sexual attack?

Not really; not unless you're facing an all-female team.

"And what do you have to roll to make a sexual attack?"