Let's see, how do I put this in a loving and supportive way...? 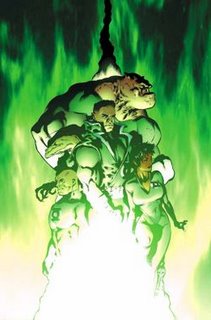 We were up against Devon's patented "Atomic Dogs" Team (Captain Atom, Adam Strange, Orion, and Krypto) and Glen's "The Future Belongs to Us" Team (The Emerald Empress, the Persuader, Validus, and Mordu).

OH, you should have seen my opponents SWEAT and struggle to maintain their poker faces! But I had the GREEN LANTERNS on the board; my victory was inevitable.

Naturally, the first thing I did was go for the "gorilla on the board": The Emerald Empress and the terrifying Emerald Eye of Ekron. I had to because (A) the presence of the Emerald Eye makes me want to wet my pants and (B) I can't resist an"injury to the eye motif" joke when the opportunity presents itself (that happens to you after you've read Wertham). I had Hal smack her halfway to the rimworlds and back, and she ran screaming back to the edge of the board to fix her hair. "Ha!," Hal thought, "your hair will never be as pretty as mine!"

Then... well, something went wrong.

It started with Kyle. There's a shock, huh? John transported Kyle face-to-face with Orion, where Kyle attacked with a savage roll of ... two, which is the Heroclix equivalent of tripping over your shoelaces while running into battle wearing loafers. Orion was not amused.

The rest was mostly a blur of shredded green latex floating around the board, and little glowing rings saying "Green Lantern terminated; commencing search for new ringbearer."

The GLs are front-loaded; effective if they get in the first hit, but if you can punch them in the face or hit them with a ceiling tile or heavy yellow lamp, they fall faster than Aunt Harriet without her medication.

Oh, and the best news of all: the next set of DC Heroclix available arrives in September... 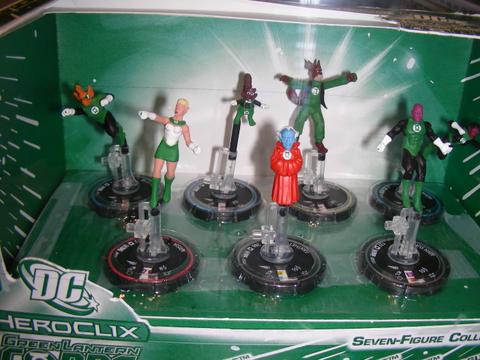 team made of all green,
will all fall to same attack;
yellow really sucks.

Who ended up winning? That "Atomic Dogs" team looks pretty strong (and fun).

No, the villains creamed us all.

Bwahahaha! As to be expected when fools like Hal Jordan are up against the likes of my ex-girlfriend! If *I* couldn't handle her what makes Hal think *he* could? Ha!

Tis a bad Guardian who blames his Green Lanterns. You wouldn't see Ganthet blogging about how Tomar-Re failed to save Krypton, would you?

Eh, he probably would. Heck, I'd read Ganthet's blog.

I really should try and watch a Heroclix game one of these days. I look at it and think it looks cool, but I'm just not ready to jump in.

Katma Tui! Be still, my heart.

You've gone too far this time, Scipio!! How dare you!

*Too angry to argue*

And come on? 4 GL's vs. a team with both Validus and Mordru? That's like sending a little league team up against a major league all-star team.

Just for my own curiosity, what versions of the figs did you use? The REVs, or the LEs?

I think they were all Exp. (except Kilowogg the Unique).

Aw, I saw the title, and thought this post was going to be about Driq, the Green Lantern that was killed fighting Sinestro, but kept almost alive by his ring. Yeah, Zombie Green Lantern.

OK, I know next to nothing about this game, but how can you have a playable piece for a Guardian? Isn't that the equivalent of having Galactus on your team or something? (OK maybe not that powerful but powerful enough so as to be unplayable?)

Man, you didn't use Guy! No
wonder they blew it! Sheesh!

Heroclix for Gnort and Ch'p? Oh, dear lord, between these and Ambush Bug, and Krypto, it's like they've reached into my mind and pulled out my dream clix!

But since I don't really play anymore and can't afford to get these singly, means they'll remain dreams. But it's still cool that they're out there.

I second sallyp! If you wanted to win, you shoulda had Guy Gardner! Sure there'd be massive property damage in the process but...

There is no Guy Gardner clix.

I assume he'll be in DC's next full set.

You've got to be kidding me.

Arrgh, Scip, I swear to all that's holy, I will learn this game, it looks WAY too fun!

I want a Zatara Jr. figure! He's too cute for words.

Mannnnnn...HeroClix Ch'p is the awful cartoony funny animal design. It should have been based on Don Newton's art.

...Wouldn't you need a Guardian or a Parallax to match up to Mordru? Or am I thinking too godlike?

The GLC don't function all that well together in Heroclix. First off, you're wasting points on a team ability you can't use. Second, nobody wins in HC with all the same powers on a team. Versatility is key.

But Hal is best when held in reserve. Use his TK and WP at first, then his RCE. Don't get him hit because he (inexplicably) has no damage reducing power. Keep that 18 defense until late in the game, when everybody else is struggling with AVs of 8 or so.

You have a problem with Ch'p? He's only like 80 points and he can carry 8 guys and makes a decent fort. Soon all will fear him!

Hey, you got a problem with the Corps? Let me break down three prime GL's for you.

Tomar Re: Have you seen this guys ranged attack? With Running Shot? He can hit you from like 14 squares away and be back on Oa for fish cakes! Plus Perplex on the first click! For 111 points!

Ganthet: Sure he's pricey at nearly 300 points but for 600+ he's way better than Parallax. Quintessence means NO OUTWIT, NO PERPLEX. His powers cannot be countered. Ever. And he'll never take pushing damage.

Ch'p: Okay, take three Rookie Katanas or Mockingbirds and line them up in front of the squirrel. You know what you get? Three front line attackers with a 20(!) defense! With Blades! Ch'p also comes with TK so you can shoot em out there at range if necessary.

Say what you want about G'nort, but lay off the squirrel!

This won't really have success, I consider like this.
metal buildings